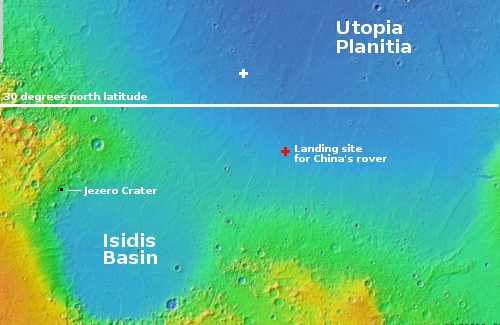 Today’s cool image is in honor the two newest Martian rovers, Perseverance (which now sits quite comfortably in Jezero Crater, ready to begin what will probably be more than a decade of exploration on the Martian surface) and China’s yet-to-be-named rover (set to hopefully soft land on Mars some time in late April).

The overview map to the right shows us the region where both rovers shall wander. The black box in Jezero Crater is where Perseverance now sits. The red cross about 1,400 miles away is the believed landing zone for China’s rover, located in Utopia Planitia at about 25 degrees north latitude. The Viking 2 landing site is just off the edge of the northeast corner of the map.

The latitude of 30 degrees, as indicated by the white line, is presently an important dividing line based on our present knowledge of Mars. South of that line the terrain is generally dry, though there is evidence that water in some form (liquid or ice) was once present. North of that line scientists have found evidence of considerable ice below the surface, with its presence becoming increasingly obvious the farther north you go.

Today’s cool image, shown below, is north of that line at 33 degrees latitude in Utopia Planitia, and is marked by the white cross, about 500 miles to the northwest of the Chinese rover’s landing site. 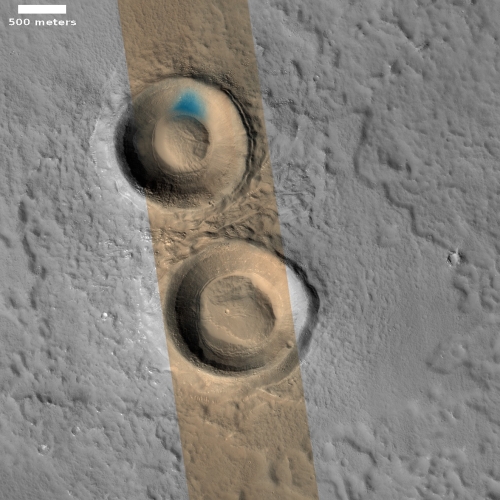 The photo to the right, cropped and reduced to post here, was taken on December 30, 2020 by the high resolution camera on Mars Reconnaissance Orbiter (MRO), and gives us a faint hint of the kind of terrain that Chinese probe might see, though because that probe will land farther south the ground will be more solid-looking because if there is any buried ice there it will be farther underground and likely in much less quantity, if there is any at all.

North of 30 degrees latitude MRO routinely finds similar blobby craters and features, all suggesting that the ground is well saturated with ice (see here and here for examples). What makes this picture especially interesting is the blue color in one part of the north interior rim of the north crater.

Why is this one area blue, and no other. According to the MRO science team [pdf], these colors from the high resolution mean the following:

Dust (or indurated dust) is generally the reddest material present and looks reddish. … Coarser-grained materials (sand and rocks) are generally bluer … but also relatively dark, except where coated by dust. Frost and ice are also relatively blue, but bright, and often concentrated at the poles or on pole-facing slopes. Some bedrock is also relatively bright and blue, but not as much as frost or ice, and it has distinctive morphologies.

Based on this information, I would guess that this south-facing slope is likely bedrock or coarser-grained materials. Ice would have sublimated away if it was exposed, especially because as a south-facing slope this terrain gets a lot of direct sunlight. Why however bedrock is only exposed on this one slope is not clear.

The big science question that China’s rover will be trying to answer is whether at 25 degrees latitude there is underground ice on Mars. Right now at that latitude scientists have not seen any obvious evidence of such. The rover has ground-penetrating radar designed to look for ice. What it finds will give planetary scientists a very important data point for mapping out the entire geological history of Mars, as well as the present environmental conditions that now exist there.

Similarly, Perseverance at about 20 degrees latitude will asking the same questions. Is there any evidence of still existing water at this latitude?