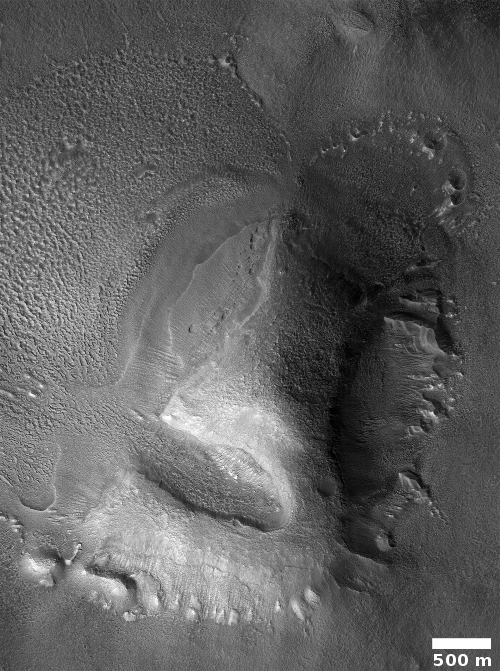 Cool image time! The image to the right, reduced to post here, was a captioned release today by the science team of the high resolution camera on Mars Reconnaissance Orbiter (MRO). It is located in Deuteronilus Mensae, a region of chaos terrain in the transition zone between the northern lowland plains and the southern cratered highlands that is also part of a 2,000 mile-long band that I call Mars’ glacier country. From the caption, written by Dan Berman, senior scientist at the Planetary Science Institute in Arizona:

Lobate debris aprons are commonly found surrounding dissected plateaus in the Deuteronilus Mensae region of Mars. They have been interpreted as debris-covered glaciers and radar data have shown their interiors to be composed of pure ice.

The mound in this image is slightly removed from most of the other plateaus, and the [debris apron] surrounding it is highly degraded. The sharp scarps on the western and eastern sides of the mound indicate that a great deal of the ice once found in these landforms has since sublimated away, leaving behind these collapsed debris cliffs.

I wonder if further research might find an ice layer in those cliff walls, especially because this photo strongly suggests that much of this mound is made of ice that is sublimating away or has flowed downward to form the debris aprons as well as that central gully.

The overview map below shows its location in Deuteronilus Mensae as well as showing almost all of the entire band of Mars’ glacier country.

The band that runs through the three mensae regions covers the latitudes from 30 to 47 degrees, dead center in the mid-latitude band where scientists have detected numerous features suggestive of buried glaciers. In these mensae however the detections are pervasive. Almost any image of any mesa shows features similar to what is seen in the photo above.