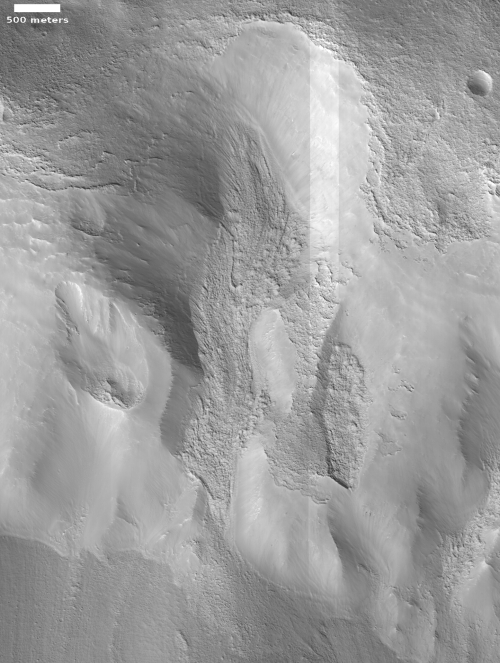 The cool image to the right, rotated, cropped, and reduced to post here, was taken on November 3, 2020 by the high resolution camera on Mars Reconnaissance Orbiter (MRO). It shows what the science team labels a “Possible Tongue-Shaped Flow Feature in Protonilus Mensae.” There is no caption, so I will try to provide.

Protonilus Mensae is part of the long string of chaos terrain that runs about 2,000 miles along the transition zone between the southern cratered highlands and the northern lowland plains at about 30 to 40 degrees north latitude, and includes the other mensae regions dubbed Deuteronilus to the west and Nilosyrtis to the east. This region of Mars I like to call glacier country, because almost every high resolution photograph appears to show glacial features. To get an idea what I mean, take a gander at these past posts, their locations indicated by number in the overview map of Protonilus Mensae below: 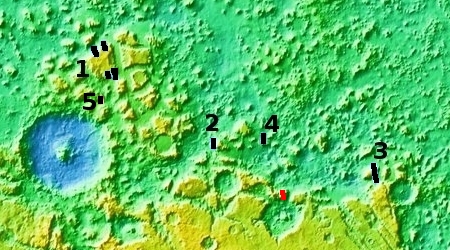 The red rectangle indicates the location of today’s “tongue-shaped flow.” The image covers the interior slope of this large unnamed 40-mile-wide crater’s northern rim. The crater itself, as shown by the wider MRO context camera photo to the right, is heavily eroded, with many breaks in its rim. The grey flatish flow at the bottom of the close-up image above is the crater floor, apparently still filled with ice.

This tongue-shaped feature is flowing downhill to the south, into this eroded crater. It also appears that ice fills the depression to the right of this feature.

The ice in this flow also appears eroded, as if it has been sublimating away rather than growing and flowing downhill to the crater flow.

Why does the ice on the crater floor seem solid and this flow appears to be shrinking? The flow is on a south-facing slope, which means it gets a lot of sunlight each day, throughout the year. Such circumstances will encourage warming and the sublimation of that ice.

Another possibility is that because this flow is high up on the rim, it is exposed to more wind, which has scoured the protective layer of dust and debris from the ice, thus exposing it more to sunlight and encouraging its decay. The crater floor will be better protected from wind, and so will still have that protective layer more fully upon it.

A third possibility is that my guess that the ice in this flow is eroded is simply wrong. It could simply be that it only looks eroded because of the roughness of its protective layer of debris.

Regardless, this photo once again illustrates the pervasiveness of glacial features in this part of Mars. Snap a picture anywhere in this strip of chaos terrain, and you will see a glacier either flowing downhill or filling the bottom of a canyon or crater.

As I have said repeatedly, much of Mars is a desert like Antarctica, ice-filled but dry.