A great hike to do on Mars! 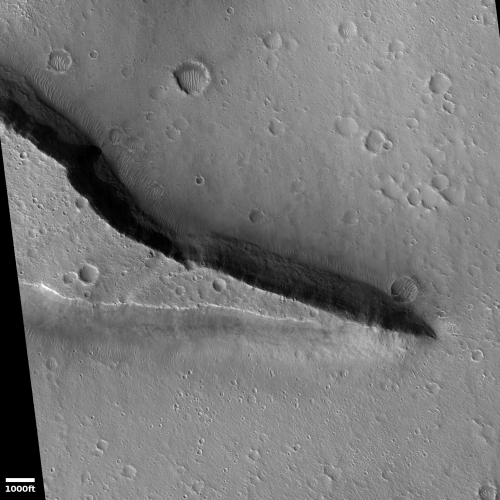 Time to take a cool image and go sight-seeing. The photo to the right, cropped and reduced to post here, was taken by the high resolution camera on Mars Reconnaissance Orbiter (MRO) on May 25, 2020, and shows a spectacular knife-edge mesa, its cliffs more than 650 feet high on either side.

This knife mesa sits among a bunch of similar mesas, and appears to be in a region that could be called chaos terrain, formed by flowing water or ice along faults, cutting criss-crossing canyons with mesas between.

This mesa points east out from the Kasei Valley, the second largest canyon draining out from the Tharsis Bulge that contains Mars’ largest volcanoes. The overview map below provides some context, with the white cross indicating the location of today’s cool image. 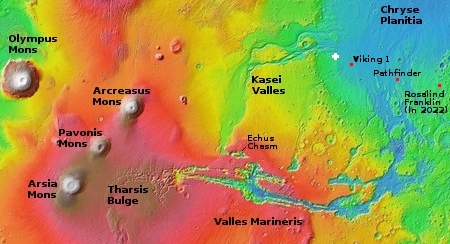 According to this 2019 paper [pdf], Kasei Valles was created by both volcanic and glacial processes, with the added possibility of liquid catastrophic floods. This particular paper theorized that the upper section of Kasei, oriented south-to-north and relatively smooth-floored and oblong-shaped, was once a large lake caused by a dam that when that dam broke the water quickly flooded the lower parts of the valley, causing the deeper channels and mesas we see there. 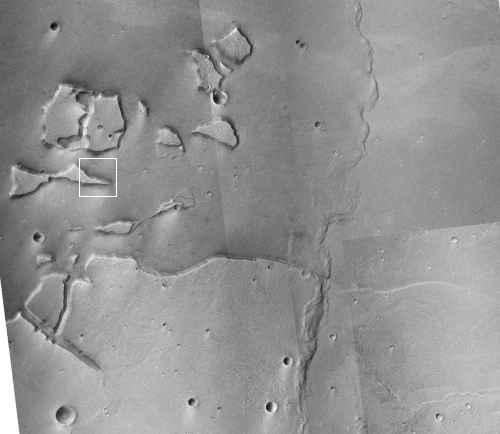 What I saw when I first looked at this image was a magnificent place to hike. Imagine walking along the crest of this mesa, with outstanding views in all directions!

The mosaic to the right was compiled from four photos taken by the context camera on MRO, designed to give scientists a wider view. The white rectangle indicates the location of the above image. From this overview the chaos terrain nature where this mesa exists is obvious. Also visible is evidence of a catastrophic flow pushing through from the west to the east, carving these mesas as well as many smaller features in the bottom-lands as that flow drained out into Chryse Planitia, part of Mars’ vast northern lowland plains.

What makes this knife mesa even more enticing as a future hiking objective is that, not far beyond the eastern edge of this mosaic sits Viking-1, the first spacecraft to successfuly soft land on the Martian surface, placed there by the United States on July 20, 1976, the seventh anniversary of the Apollo 11 landing on the Moon. 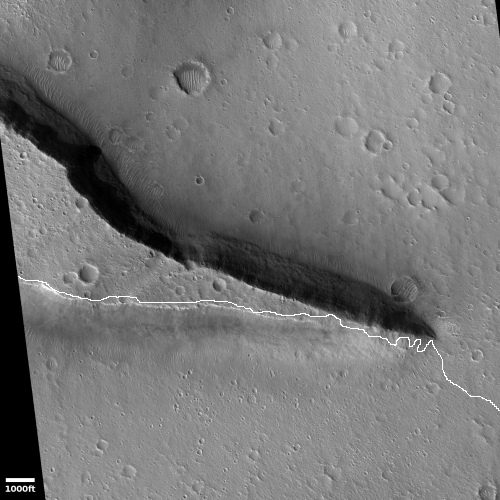 To the right is the same image from above, but this time I have annotated it with a proposed hiking trail, working along the south rim of the mesa to then switchback down the mesa’s nose, where the slope is reasonable. The trail could then head out onto Chyse Planitia towards that Viking-1 landing site, about 100 miles away.

In fact, I could easily see later generations of Martian settlers creating a Mars-wide trail, running from Olympus Mons, to the southeast between Arcreasus and Pavonis Mons, then to the northern rim of Marineris Valles, then cutting north into Kasei Valles to follow this valley to traverse Knife Mesa for its views, then out into Chryse Planitia to visit the landing sites of Viking 1, Pathfinder, and the European rover Rosalind Franklin.

And that’s only this side of the planet. The trail could circle the globe, visiting many of the first unmanned landing sites as well as some the Mars’ most spectacular geological features.

I know this proposed trail is only a casual fantasy of mine. I also know that it will someday be real, if only we remain bold and continue to attempt great things, despite the risk.