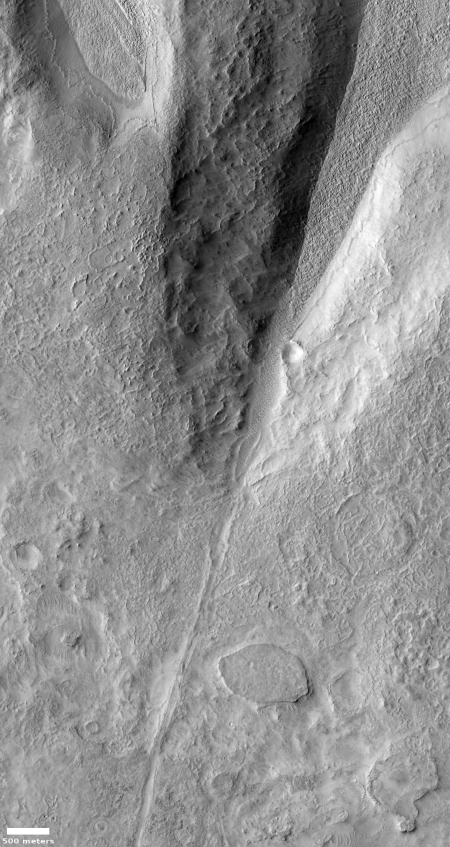 Cool image time! The photo on the right, rotated, cropped, and reduced to post here, was taken by the high resolution camera of Mars Reconnaissance Orbiter (MRO) on October 7, 2019. In one image it encapsulates the process that forms one of the more intriguing and major Martian geological features, dubbed chaos terrain.

This image shows the beginning of this process. It is centered on a fault line running from south to north. In the south all we can see is the fault expressing itself as a very shallow small depression in the plains. As we move north the depression widens and deepens. The material inside the depression near the top of the photo could very well be a buried inactive ice glacier. Several million years ago, when the inclination of Mars was much higher and the mid-latitudes were much colder than the poles, the water ice at the poles was sublimating from the poles to those mid-latitudes where it fell as snow. At that time this glacier was likely active, helping to grind out this canyon.

The image was taken at the south border of a chaos region dubbed Nilosytis Mensae, as shown by the overview maps below. 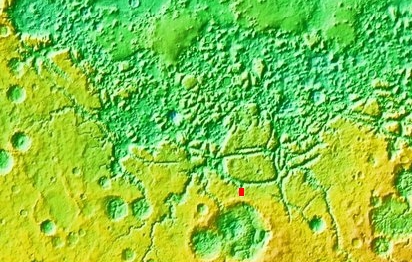 The top map shows a wide overview of this region, showing its context on Mars. You can see that to the west is another region of chaos terrain dubbed Protonilus Mensae, which I had highlighted in an earlier cool image showing the numerous inactive glaciers flowing down from one single mesa. To the east is the planned landing site for the Mars2020 rover, inside Jezero Crater and adjacent to a spectacular delta of material that had flowed out the upper highlands.

The bottom map zooms into Nilosyrtis Mensa, with the location of today’s image indicated by the red rectangle. It illustrates starkly the badlands nature of chaos terrain. The canyon of the image above runs north until flows out into a wider east-west long canyon, which in turn connects to other north-south canyons to define the large mesa to the north. These all eventually flow into a region of increasingly smaller mesas that soon becomes a messy collection of complex hills, canyons, and hollows.

The general grade is downhill to the north, to the lowlands. As you move north the badlands finally smooth out into those lowland plains. Today’s cool image however shows the start of that long process. Here, a simple fault became a canyon.