A journey into the depths of Valles Marineris

Cool image time! Rather than start with the cool image, let’s begin with the long view. To the right is a wide mosaic of Valles Marineris on Mars, the largest known canyon in the solar system. About 2,500 miles long and 400 miles wide, this canyon is so large that it would cover most of the United States if put on Earth. The Grand Canyon, 500 miles long by 19 miles wide, could easily fit within it and not be noticed. In depth Valles Marineris is equally impressive, with a depth of more than four miles, about four times deeper than the Grand Canyon. 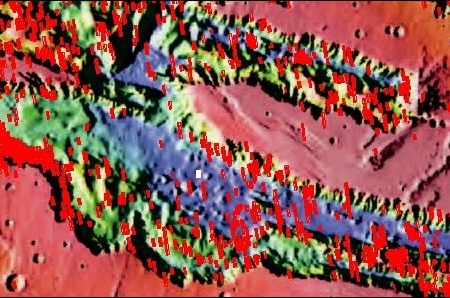 The white cross in the mosaic above is where we are heading. You can see it as the white box in the zoomed in overview to the right. This central part of Valles Marineris is named East Melas Chasma, and the red boxes indicate locations where the high resolution camera of Mars Reconnaissance Orbiter (MRO) has already taken images.

As you can see, we do not yet have many high resolution images of this part of the canyon floor. The white box is the most recent image, and is the subject of today’s post. 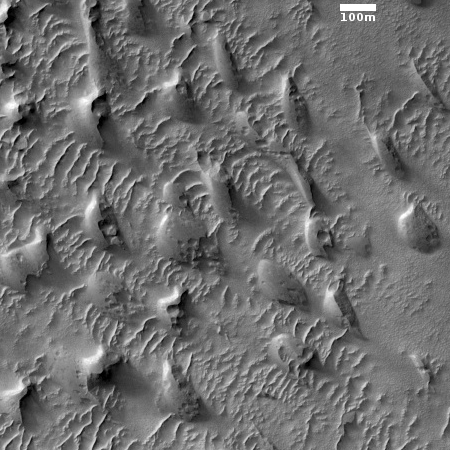 The photo to the right is a cropped section of this recent photograph, taken by MRO on September 15, 2019. While the full image contains lots more weirdness, I have focused on a strange dune field that is also interspersed with larger dunes that for some reason are being eroded on their eastern faces, creating arclike scarps. 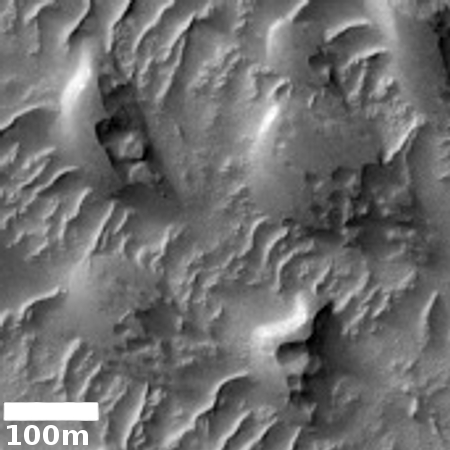 The last image in this sequence zooms into four of the more interesting of these larger dunes to get a closer look at the erosion process that is destroying them. It shows that in several cases, the erosion begins not on the eastern face but on the top of the dunes, producing depressions that eventually lead to the dune’s collapse eastward. It is as if there is some erosion process eating out the inside of the dune, causing sections on the east side, where the wind impacts the dune, to eventually fall away.

What could cause this erosion? Your guess is as good as mine. My first thought is that water ice might be a factor, but this is highly speculative. The changes here could be caused by any number of geological processes, many of which are likely unique to Mars and outside our present geological knowledge.

It will be many decades however before we get to this remote place on Mars to answer these questions. Valles Marineris is generally not considered an ideal first human landing site, because of the terrain and the data that suggests it is not that water rich. Scientifically, there are many other places that scientists want to explore with robots first.

The curious among us will just have to wait, even as these orbital images tantalize us with strange mysteries.