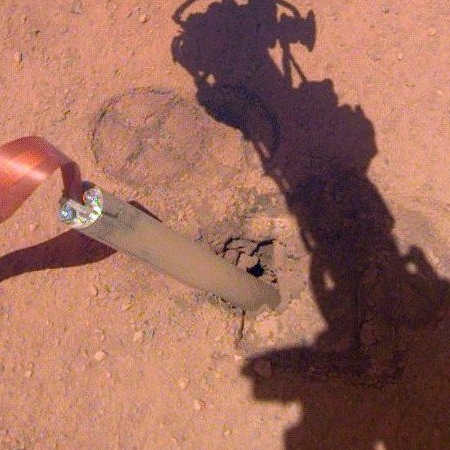 The InSight science image has lifted the lander’s rover arm off the drill hole and taken a new series of images in an effort to discover what caused the mole to pop out during its most recent drilling effort.

The image to the right, cropped to post here, was the first in a short movie made from all the images taken over the course of a day. The sequence shows the change in shadows, which helps define the situation in the hole.

This image however I think tells all. It shows that the walls of the hole have collapsed all around the mole, widening it further. It also shows that, once the mole popped out to lean sideways against the left wall, much of that material then fell into the hole, refilling it. These facts are very evident when today’s image is compared with this image from October, taken prior to the most recent drilling effort. The hole has become much wider, there is more material inside it, and the mole is now much farther out.

All these facts bode ill for the mole ever succeeding in drilling down the planned fifteen or so feet to insert a heat probe into the interior of Mars in order to take the first ever measure of the planet’s interior.

An overall assessment of this NASA mission is not very positive. The contribution from its international partners is especially bad. The mission was launched two years late because the French effort to build the seismometer failed. NASA had to subsequently give the job to JPL to get it done. Now the heat sensor is a failure, because the German-built mole has failed to get the heat sensor where it needs to be.

The seismometer and heat sensor were InSight’s only science instruments. This means that we will likely only get results from one.