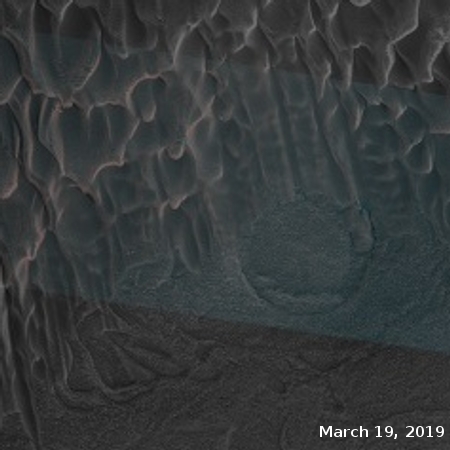 Since the onset of the Martian spring in the northern hemisphere back in March of this year, scientists have been busy using the high resolution camera on Mars Reconnaissance Orbiter (MRO) to monitor the expected sublimation and disappearance of the cap of dry ice that falls as snow to become a winter layer mantling both the more permanent icecap of water 7,000 feet deep as well as the giant dune sand seas that surround that northern icecap.

The image on the right was first posted here on Behind the Black on June 6, 2019 as part of a long article describing that northern polar icecap and its annual evolution. It shows a set of dunes that Candice Hansen of the Planetary Science Institute in Arizona, who requested the image, has dubbed “Buzzell.” When that picture was taken in March, the frozen dry ice layer of translucent carbon dioxide still coated the dunes. The image’s darkness is because the Sun has just begun to rise above the horizon at this very high latitude location (84 degrees). The circular feature is likely a buried ancient crater, with the streaks indicating the prevailing wind direction blowing both sand and frost about.

On August 9, 2019 I provided an update on this monitoring, when new images of this same location were downloaded from MRO in April and June. MRO has now taken a new image of Buzzell, on October 2, 2019. Below the fold are all these images so that you can see the sublimation and disappearance of that dry ice layer over time. 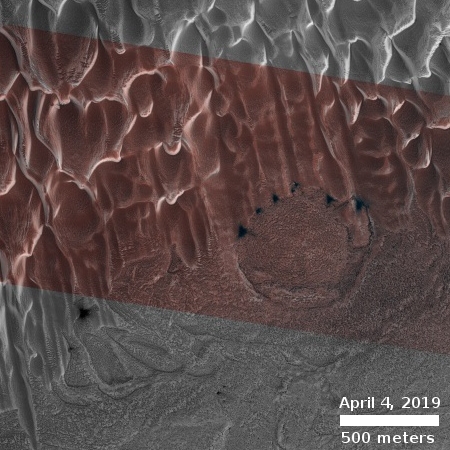 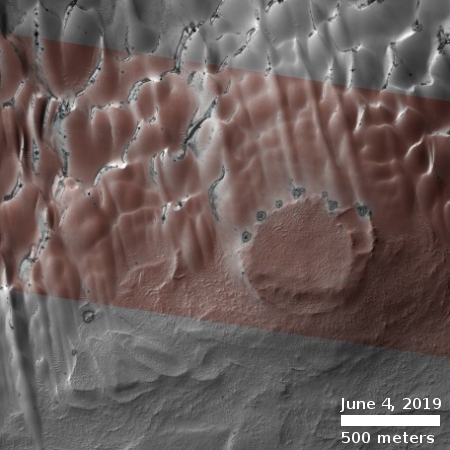 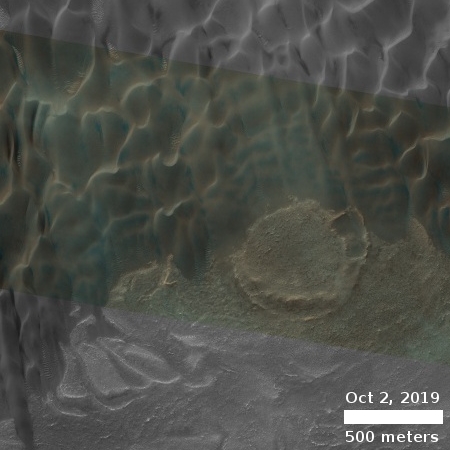 Looking at the October image it surely appears to my eye that this onset of summer and its long days has completed the disappearance of that carbon dioxide layer, leaving these dunes completely exposed. The black spots seen in the middle two images to the right and indicative of cracks in that dry ice layer where it has begun to sublimate, splattering dark dust from below across its surface, are gone in October. Instead, we see what appears to be the relatively hard crusty surface of the dunes themselves, as well as the rim of that ancient crater. That crater by the way appears to be a pedestal crater, its floor more resistant to erosion than the surrounding dunes, so that it now sits above them.

I emailed Dr. Hansen to see if my conclusions were correct. Though she said that “all the seasonal ice should be gone by now,” she also noted that she has not yet had time to analyze the image, so this is not yet confirmed.

The research by Hansen and others of these seasonal processes has also found that this sublimation of the dry ice layer also causes annual changes to the dunes. Unfortunately, she also explained to me that she has not yet been able to analyze this most recent image to see if Buzzell had been reshaped in any way due to this spring’s activity.

Meanwhile, the monitoring of avalanches on the nearby edge of the polar ice cap continues. Only a few miles to the north and west of Buzzell are two areas where avalanches have been repeatedly seen coming down from that polar cliff edge, as they happen. In the most recent release of new MRO images are two new images of those cliffs, here and here.

In comparing these new images with previous ones, it appears to my uneducated eye that the avalanche season has ended. While the earlier image of the first example above clearly showed avalanches, as they were occurring with the puffs of clouds at their base, the new image does not.

Avalanches might still be on-going, but it will take some real scientific analysis to determine their changing activity from the spring to the summer months.