Modern science: Celebrating a “high priestess” instead of data

The corruption of modern science and our intellectual class was well illustrated today by the following headline and article in the peer review journal Science:

From the article’s lead:

In May, when several prominent U.K. scientists pushed back against a Royal Society report recommending face masks to help control the spread of COVID-19, Trisha Greenhalgh was furious. The scientists argued there was insufficient support in the scientific literature for the efficacy of masks, and the U.K. government, following their lead, declined to mandate masks for the general public.

“The search for perfect evidence may be the enemy of good policy,” Greenhalgh, a physician and expert in health care delivery at the University of Oxford, fumed in the Boston Review. “As with parachutes for jumping out of airplanes, it is time to act without waiting for randomized controlled trial evidence.” [emphasis mine]

The highlighted words have been the typical argument of the global warming crowd for decades. “We can’t wait for evidence! We need to act now before it’s too late!”

Moreover, she — along with the writer of this Science article — also copies another global warming dishonest tactic, posing a false argument by claiming that the opposing scientists requried a “randomized controlled trial” to demonstrate the usefulness of masks. This is an absurd misstatement, as it ignores decades of research that already exists and was referenced by those opposing scientists, that showed that mandating widespread mask use was generally a bad idea, and would accomplish nothing good. 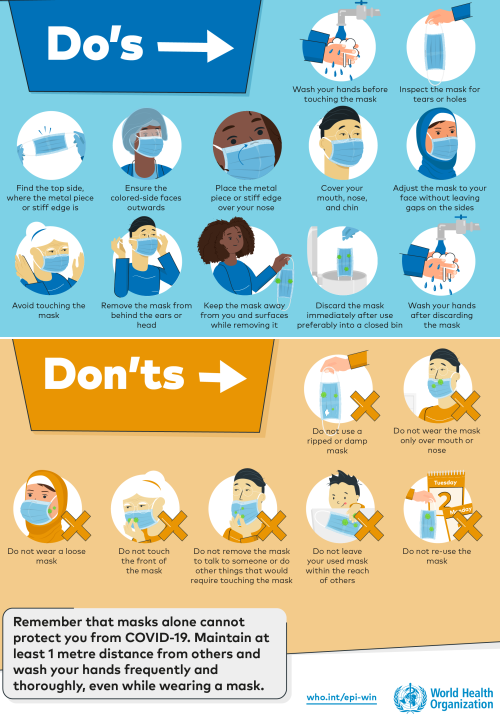 For the full images, go here and here.

Greenhalgh, who belongs to a WHO committee that she forced to change from “claiming masks are harmful” to now endorsing mask use, very clearly falls into this mindset. She is outraged that scientists would dare defy her opinion on masks. Despite the clear uncertainty of the science and the solid evidence that improper use of masks can be harmful (as illustrated by the WHO graphic to the right), she forged ahead with her political campaign and got WHO to comply.

Apparently the editors and writers at Science also agree with her approach of ignoring data for the sake of an political agenda, as this article lovingly endorses her campaign and tactics.

The greatest irony here is that Greenhalgh was dubbed “a high priestess” by a critic. Now, Science is elevating that term to a compliment, and a guidepost for what future scientists should strive for. “Forget data and research, the focus must be on what we believe and desire, even if no evidence backs up those opinions! And above all, we must worship our leaders as priests and priestesses with privileged and special knowledge who must never be questioned!”

I suspect this corruption of science at Science is partly fed by its funding. At the top of the article they note:

Science’s COVID-19 reporting is supported by the Pulitzer Center and the Heising-Simons Foundation.

The Pulitzer prize in the last two decades has become a joke, a leftwing partisan Democratic Party operation designed to strengthen the agenda of leftist news organizations while squelching any dissent to that agenda.

As for the Heising-Simons Foundation, a five minute review of its homepage reveals it to be very leftist in agenda, pushing the certainty of global warming caused by human activity as well as racist policies favoring one race over others. Moreover, political contributions from people connected to this organization go exclusively to Democrats. Like the Pulitizer Prize, this foundation is a wolf in sheep’s clothing, dressing itself up to be fair-minded as it pursues a very partisan leftist agenda.

The funding these organizations have given to Science is clearly influencing its reporting. These advocacy groups want their agendas pushed, and Science appears now quite eager to do it. I fully believe that this eagerness has also been reflected in the journal’s peer review process, where there has been evidence in recent years that results counter to the global warming agenda have been squelched.

The tragedy here is that the very basis of science — and the Enlightenment that brought us our rational civilization of freedom and justice during the past five hundred years — relies not on belief and high priestesses but on data and facts and the unwavering cold search for truth, no matter what it might lead. As Francis Bacon commanded in 1620 at the very beginning of the Enlightenment:

Truth is to be sought for, not in the felicity of any age which is an unstable thing, but in the light of nature and experience, which is eternal. . . . Let every student of nature take this as a rule — that whatever his mind seizes and dwells upon with peculiar satisfaction is be held in suspicion. [Novum Organum, sections 56 and 58]

For the past four centuries scientists, and our society, took this command to heart, relying not on belief, opinions, and “the felicity of any age” but on facts and knowledge and reality.

For the journal Science, which represents well our modern bankrupt academic intellectual class, such standards are no longer satisfactory. We must pursue the religion of politics and opinion as espoused by priests and priestesses, above all. Facts and knowledge be damned!

Unless we can turn this around we are seeing the end of that Enlightenment, and the coming of a dark age that could last centuries. Woe to the future.