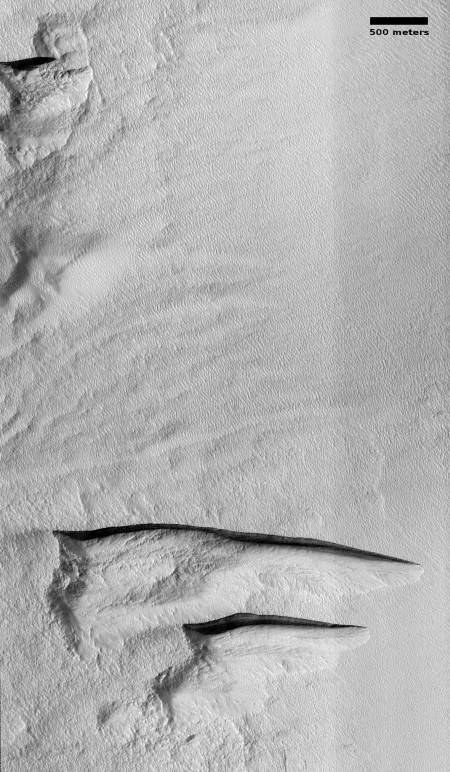 In my review of the November image download from the high resolution camera on Mars Reconnaissance Orbiter (MRO), I am, as a cave explorer and cartographer, naturally attracted to any image with “pit” in the title. The image to the right, cropped, rotated and reduced to post here, was released with the title “Pit in Mid-Latitude Mantle”. That immediately caught my eye, and in looking at it I was at first unimpressed. The three apparent collapses are interesting in that they all have south-facing sharp cliffs, but other than that I wasn’t sure why they were of interest.

Then I took at look at this image’s location. It is somewhat far south on Mars, at latitude -60 degrees, sitting south of Hellas Basin, the deepest basin on Mars. This location is in the same general area where scientists announced in January the discovery of eight cliffs with visible exposed ice layers. The white horizontal bar below Hellas Basin on the map below and to the right shows the region where seven of those ice cliffs were located. To quote the January press release: The ice was likely deposited as snow long ago. The deposits are exposed in cross section as relatively pure water ice, capped by a layer one to two yards (or meters) thick of ice-cemented rock and dust. They hold clues about Mars’ climate history. They also may make frozen water more accessible than previously thought to future robotic or human exploration missions.

Researchers who located and studied the scarp sites with the High Resolution Imaging Science Experiment (HiRISE) camera on MRO reported the findings today in the journal Science. The sites are in both northern and southern hemispheres of Mars, at latitudes from about 55 to 58 degrees, equivalent on Earth to Scotland or the tip of South America. “There is shallow ground ice under roughly a third of the Martian surface, which records the recent history of Mars,” said the study’s lead author, Colin Dundas of the U.S. Geological Survey’s Astrogeology Science Center in Flagstaff, Arizona. “What we’ve seen here are cross-sections through the ice that give us a 3-D view with more detail than ever before.”

In an email correspondence today with Dr. Dundas, he confirmed that the image to the right was of ice cliffs not included in the January paper. The image was a follow-up of an earlier MRO image and was taken to confirm the ice cliff’s existence.

What I noticed in reviewing the January paper was that these three new ice scarps were actually outside the white bar on the map above, located at -60.7 degrees latitude, 83.5 degrees longitude. 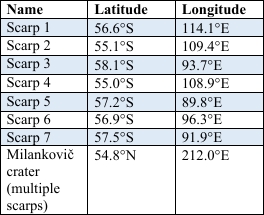 The table to the right, from the January paper, lists the locations of the previously discovered scarps. This new ice cliffs are located farther to the south and to the west than the previous scarps. They essentially extend the range of these scarps. Unfortunately, because a full survey of the surface has not yet been done, we don’t yet know how pervasive this ice layer is on Mars, or if it is generally located only in this region and latitude of the planet.

Dundas also explained to me that “The scarps are actually most important for what they show about the vertical structure of the ice, which is hard to get in this kind of detail.” The image below is a figure from that January paper, showing what those earlier scarps revealed about the ice’s vertical structure.

You can see similar details of vertical structure with these new ice scarps. The image on the right is a detail from the longest cliff in the middle of the new image. There are clearly different ice layers here. The dark streak across the base is especially interesting.

There will come a time when Martian settlers will set up operations here, mining the water for their use. This could very well be extremely valuable real estate on Mars.