If all goes right, on February 18, 2021 the rover Perseverance will gently settle down onto the floor of Jezero Crater on Mars. The image to the right is probably the most reproduced of this site, as it shows the spectacular delta that some scientists believe might be hardened mud that had once flowed like liquid or lava from the break in the rim to the west.

They hope to put Perseverance down to the southeast of that delta, as shown in the overview map below. 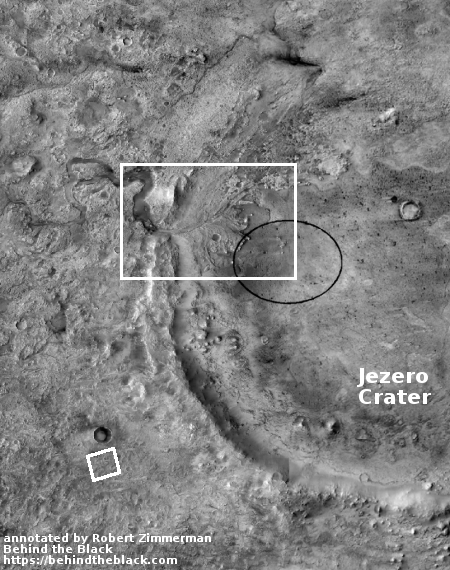 The large white rectangle shows the area covered by the image above. The black ellipse is Perseverance’s target landing zone. Ideally they hope to land close to that delta so that the rover will be able to reach it relatively quickly and begin to climb onto it. As their landing ellipse touches the delta’s edge, they also hope in trying to get close, they don’t end up too close and touch it. Such a landing will not be kind to the rover.

The rover’s goal will be first to study the floor of the crater, then the delta itself, working its way uphill until it reaches the break in the crater rim where the flow had entered. The science team will then have the rover enter that canyon, continue working its way uphill to the west until it climbs up out of that meandering drainage canyon onto the rough cratered terrain beyond.

It will take years to do this. I estimate the delta itself from head to foot to be between three to five miles long. In comparison, Curiosity is only now reaching the very base of Mount Sharp, after eight years traversing the floor of Gale Crater and the mountain’s foothills, having traveled a little more than fourteen miles. That’s less than two miles per year.

Perseverance will probably travel at about the same pace. Thus, assuming it lands in the very center of the landing zone, it will have to travel about eight miles to get to that rim, taking probably between five and six years, as the scientists will, like Curiosity, have it stop several times for months along the way to drill and analyze samples. Unlike Curiosity, Perseverance will also cache some of those samples for pickup by a later sample return mission. 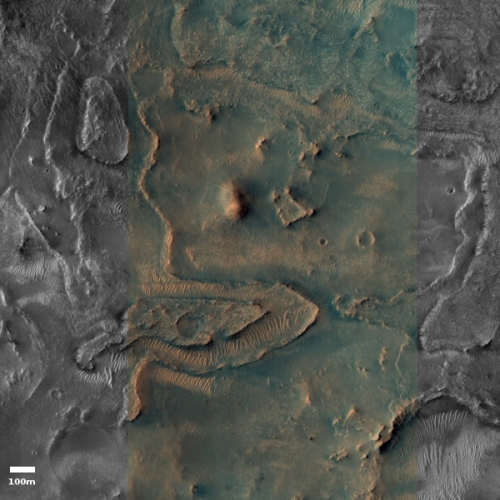 All told, do not expect Perseverance to climb out onto those upper highlands till around 2030. At that time the scientists have many options. To the right is just one, its location indicated by the small white box on the overview image.

The photo, rotated, cropped, and reduced to post here, was taken by the high resolution camera on Mars Reconnaissance Orbiter (MRO) on February 8, 2020. It shows a strange zig-zag terraced ridge surrounded by hills, craters, and dune fields. The different colors in the color strip also suggest the presence of different materials in the ground.

Getting to this place however is optimism in the extreme. The distance to it from the break in the canyon is actually longer than the distance from the landing ellipse to the rim. It will likely take most of the decade of the 2030s to reach this spot, which means Perseverance will have persevered on Mars for almost twenty years if it gets this far.

Let us hope that this rover is well named. Let us also hope that before it dies human beings will have also arrived on Mars, and will be able to come by to check on it. And if Perseverance is then still operational, scientists on Earth will finally be able to use it to snap a picture of life on Mars, even if that life came from Earth.