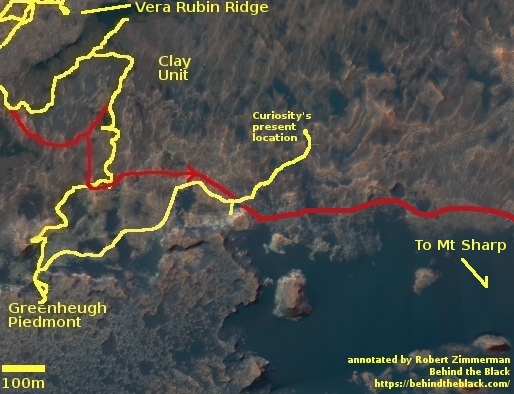 Since my last update on July 7, 2020, Curiosity has quickly moved a considerable distance to the east, as planned, skirting the large sand field to the south in its journey to the best path upward onto Mt. Sharp. The science team however has detoured away from their planned route, shown in red on the map, heading downhill a bit in order to find one last good location in the clay unit to drill. They are at that location now and are presently scouting for the best drilling spot.

About a week ago, before heading downhill, they had stopped to take a set of new images of Curiosity’s wheels. 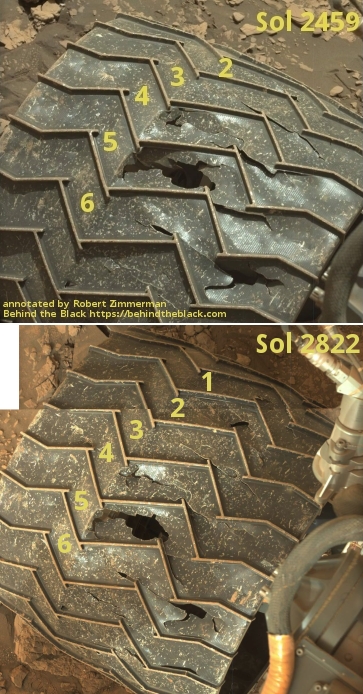 For the full resolution images, go here for
the top image and here and here for the
bottom image.

The engineers wished to gauge how the rover was doing in the first six weeks of its fast-paced journey east. They had surveyed the wheels in May, and thought it wise to look at them again to see if any significant changes had occurred.

The two images to the right provide some encouragement. The top image of this wheel was taken more than a year ago. The bottom mosaic, compiled from two images, was taken last week. In comparing the same tread sections, as indicated by the numbers, it appears there has been little or no new damage in that year, and in fact, because of the lighting, it almost appears as if some the broken openings have actually gotten smaller.

From this one comparison it appears that the care the engineers have been taking over the past three years to protect the wheels from damage continues to work. Of course, this is only one section of one wheel, and Curiosity has six total. I have not done a survey of them all, so it could be that other wheels have deteriorated more.

Regardless, this one comparison suggests that the wheels are holding up, and that Curiosity’s journey will continue unhampered.

Once they complete this week’s drilling effort, expect the rover to quickly head east again, aiming for the gap between the very rough Greenheugh Piedmont and the first steep cliffs of Mt. Sharp. They hope to reach this point in the fall, when the rover will finally leave the foothills of Mt Sharp and begin climbing the mountain. Their goal is the dark canyon in the first image above, uphill from where Curiosity sits now.