Summary: Curiosity in the clay unit valley. Opportunity’s long journey is over. Yutu-2 creeps to the northwest on the Moon’s far side.

For the updates in the past year go here. For a full list of updates before February 8, 2018, go here. 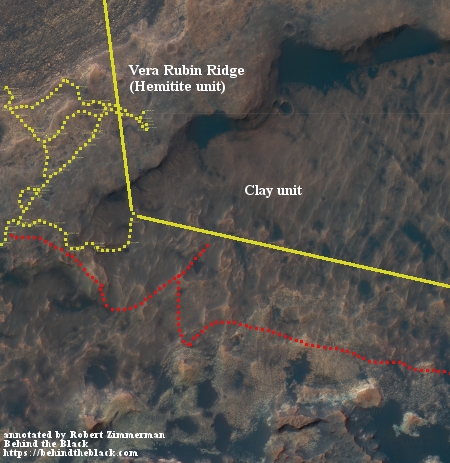 Since my January 22, 2019 update, Curiosity finally drove down off of Vera Rubin Ridge into a valley between the ridge and the lower slopes of Mt Sharp. The Mars Reconnaissance Orbiter (MRO) overview on the right has been annotated by me to show the rover’s travels (shown by the yellow dotted line), with its proposed route indicated by the red dotted line. The yellow lines indicate approximately the terrain seen in the panorama above. The panorama was created from images taken on Sol 2016.

The valley that Curiosity is presently traversing is dubbed “the clay unit” or “the clay-bearing unit” by the geologists, based on its make-up determined from orbital data. So far they have found this terrain to be “some of the best driving terrain we’ve encountered in Gale Crater, with just some occasional sandy patches in the lee of small ridges.” Initially they had problems finding any rocks or pebbles large enough for the instruments to use for gathering geological data. For the past week or so, however, they have stopped at “bright exposure of rock” where some bedrock was visible, giving them much better material to work with.

They need to figure out how this bedrock differs from that found on Vera Rubin Ridge. This will also help them map out the geology as they continue their climb of Mount Sharp.

Based on past experience, they will spend almost a year in this clay unit, before moving onto the next geological layer, dubbed “the sulfate unit.” This next geological unit is still quite a distance away (well off the right edge of the overview above) so it will likely be more than a year before they reach it. As they get closer the terrain will continue to get rougher and more spectacular, because it is that unit where I think the first dramatic slopes of Mount Sharp will be reached (as shown in my January 22, 2019 update).

They might hurry a bit however. At the base of that sulfate unit is the first of two “recurring slope lines” that they want to get a close look at, features that are thought to be seasonal seeps of water or brine coming from below ground. Studying the geology of that feature will maybe be one of the most important things Curiosity ever does, so the sooner they do it, the better.

This is my farewell update on Opportunity, whose mission was officially declared over on February 13, 2019. NASA finally decided that with no response from the rover after more than six months and a 1,000 pings, it was time to call it a day.

During Opportunity’s almost fifteen years of operation it traveled 28 miles,and took 228,771 images. I think its most spectacular achievement was traveling the many miles from its initial landing site to fourteen-mile-wide Endeavour Crater. The journey took several years, all of which occurred well after the rover was supposed to have died.

The rover now sits silent within the rim of Endeavour. Though unlikely, there still remains the very dim possibility that its solar panels will be blown clear of dust, its batteries will get recharged, and it will then call home for advice. At that point it will only be necessary for someone to notice.

More likely, it will sit there silent for several generations, until a crop of new explorers arrive to pick it up and put it in the first Martian museum of space travel. 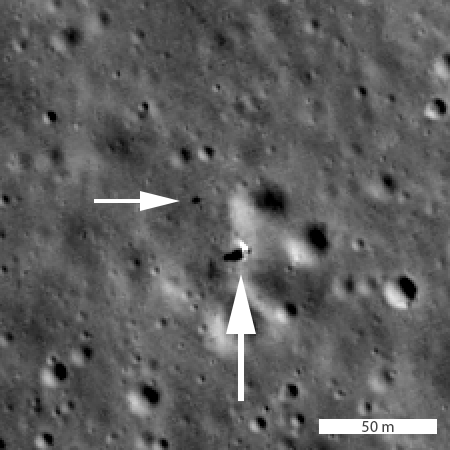 Both the Chang’e-4 lander and the rover Yutu-2 have now entered their second lunar night and their second nighttime hibernation. Since their landing on January 2, 2018, they have experienced two lunar days, during which the Chinese science team put both into hibernation during the heat of the day. Full science operations therefore only occurred during the morning and afternoon periods.

During those times they moved Yutu-2 about a hundred feet to the northwest, circling around the two larger craters to the north and east of Chang’e-4. It has already far surpassed the accomplishments of their first lunar rover, which only was able to rove for a very short distance before getting stalled. How far they will travel for how long remains at this time an unknown.

In July 2020 two more rovers will be launched to Mars, Europe’s ExoMars Rosalind Franklin rover and NASA’s Mars 2020. When they arrive I will include them in these updates. Their journeys will underline how the human exploration of the solar system is becoming more and more substantial.