Sunspot update: The Sun blasts off!

Over the weekend NOAA posted its monthly update to its graph showing the long term trends in the Sun’s sunspot activity. As I do every month, I have posted that graph below, annotated to show the previous solar cycle predictions and thus provide context.

In December the Sun’s sunspot activity not only continued the pattern of the past two years — whereby sunspot activity has consistently exceeded the prediction of NOAA’s solar scientist panel — the amount of activity shot up like a rocket. December 2021 saw the most sunspots in a single month since September 2015, when the Sun was about a third of the way into its ramp down from the solar maximum in 2014. 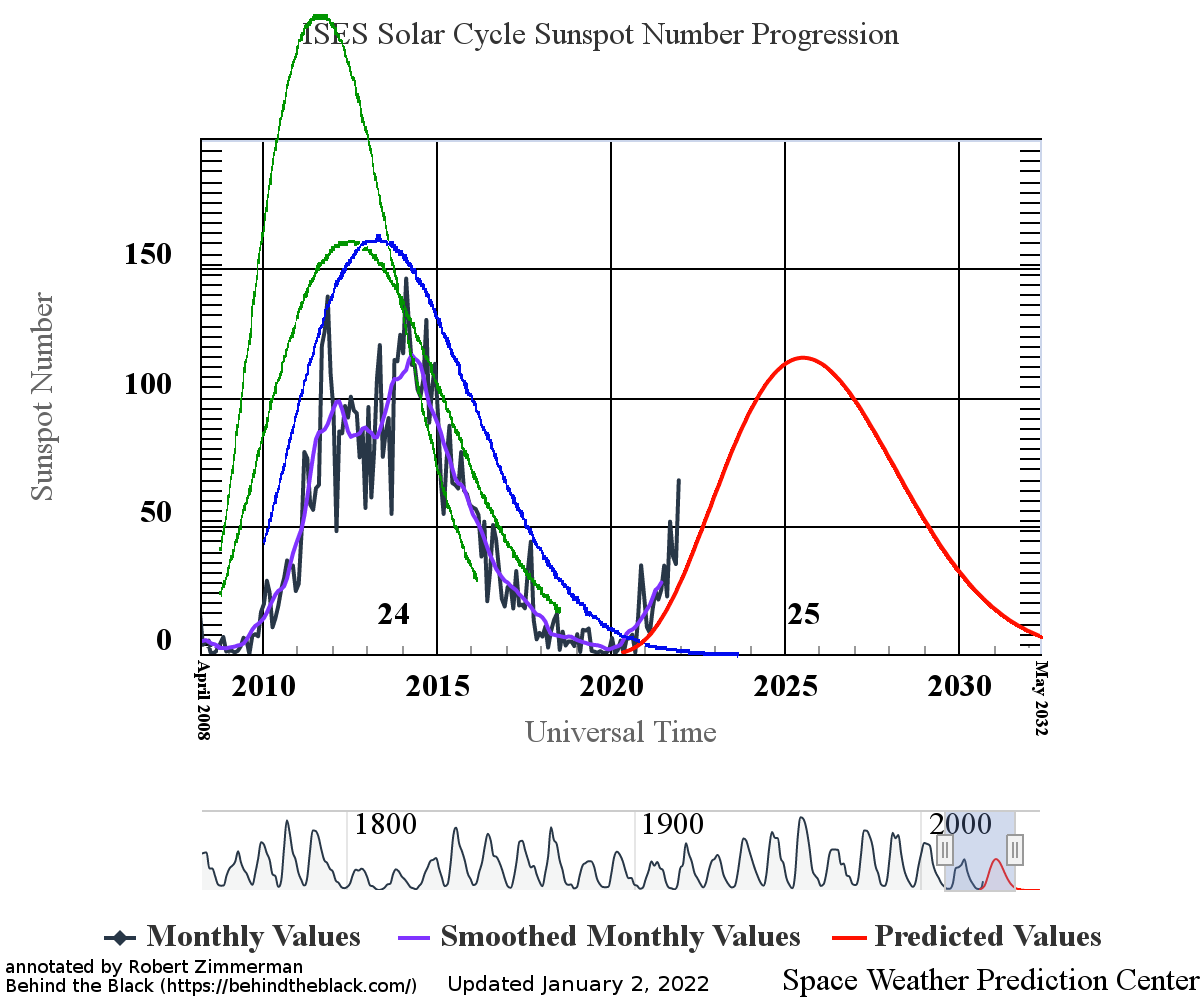 At the pace solar activity has been increasing in the past two years, the Sun will reach the predicted maximum in 2024, a year and a half earlier than predicted. Based on observations of the solar cycle for the past two centuries, it is unlikely that maximum will be reached at that point and that the activity will begin to decline. Except for the last solar cycle, short cycles have routinely been linked to high activity. The fast ramp up towards the next maximum suggests that sunspot activity will continue to increase, and that next maximum will be a high one, as predicted in December 2020 by small group of dissenting scientists.

Does that mean that dissenting group really knows what is going on? Not on your life. The solar scientist community makes these predictions based on past behavior, not on any fundamental understanding of the underlying processes in the Sun’s magnetic dynamo that cause the cycles of sunspot activity.

In other words, they are generally guessing, based on knowledge of only superficial data. This is why they could not initially agree on a consensus prediction for the last maximum in 2007, and only reached a consensus in 2009 when the ramp up to maximum was underway. At that moment their prediction was like betting on a horse race after the horses have left the starting gate and have already completed the first turn. Of course your bet is going to more likely right.

Except that even their 2009 prediction was wrong, overstating significantly the amount of activity at maximum, and missing entirely the unprecedented double peaked maximum with the second peak greater than the first.

The same thing happened in 2020, when NOAA’s panel of twelve scientists predicted a weak maximum, while a smaller group of dissenters predicted a strong maximum. There was no real consensus, and even if there had been, it would not have proved anything, as any consensus could have been wrong as well.

What the Sun is really telling us by its recent behavior is that we do not understand it. And it is likely that it will take many more decades, possibly centuries, before we do, since the fundamental causes of the Sun’s behavior take many centuries to unfold. Remember, this is a star with a lifespan of billions of years. We have only been studying it with any precision now for a little more than 40 years. It would be the height of arrogance to claim any real knowledge with such a small database.

One last point that bears repeating. In my November 2021 update, I predicted that the higher than expected sunspot activity might cause a rise in the Earth’s global temperature. I hold to that prediction, but want to once again quote this important caveat:

Global warming activists will loudly claim that this rise [in temperature] was caused by human activity, and that everyone (but them) must stop using cars and airplanes and fossil fuels to save the planet, even though they will not really know if the two are connected.

It is important to note that I am not doing a similar thing, claiming that the rise in temperatures is definitely linked to higher solar activity. Just as global warming activists have no idea why the temperature rises, neither do I. All I am noting is that changes in solar activity has matched changes in the global temperature, and if we really want to find out what causes those temperature changes, we need to consider all possibilities.

Right now, too many climate scientists dismiss the possible contribution of the Sun. And for them to do good and trustworthy science, they need to stop doing that.