NOAA’s prediction for the next solar maximum

Last week NOAA introduced a newly revamped graph for tracking the monthly activity of sunspots on the Sun’s visible hemisphere. (You can see an example of the old graph, used by them for more than fifteen years, here.)

In order to properly understand the context of future sunspot activity, it is important to understand how the new graph aligns with the old. My first attempt to do so in my April 3, 2020 sunspot update, unfortunately was a failure. While most of my conclusions in that update remain correct, my attempt to place NOAA’s prediction for the next solar cycle on my graph was in error.

I had not realized that NOAA had changed its sunspot number scale on the graph’s vertical axis. In their old graph they had used the monthly sunspot number count from the Royal Observatory of Belgium. The new graph instead used the sunspot number from NOAA’s own Space Weather Prediction Center (SWPC). Both numbers are creditable, but the solar scientist community has switched entirely to the latter in the past few years because they consider its criteria for determining the count across all past cycles to be more accurate.

The Belgium numbers have traditionally been about one third lower than SWPC’s. Not realizing that NOAA’s new prediction was based on the SWPC numbers, I therefore placed it on the graph using the Belgium numbers and thus made the peak of the solar maximum 33% too high.

Below is NOAA’s new graph, annotated properly with both the past and new solar cycle predictions added now correctly. 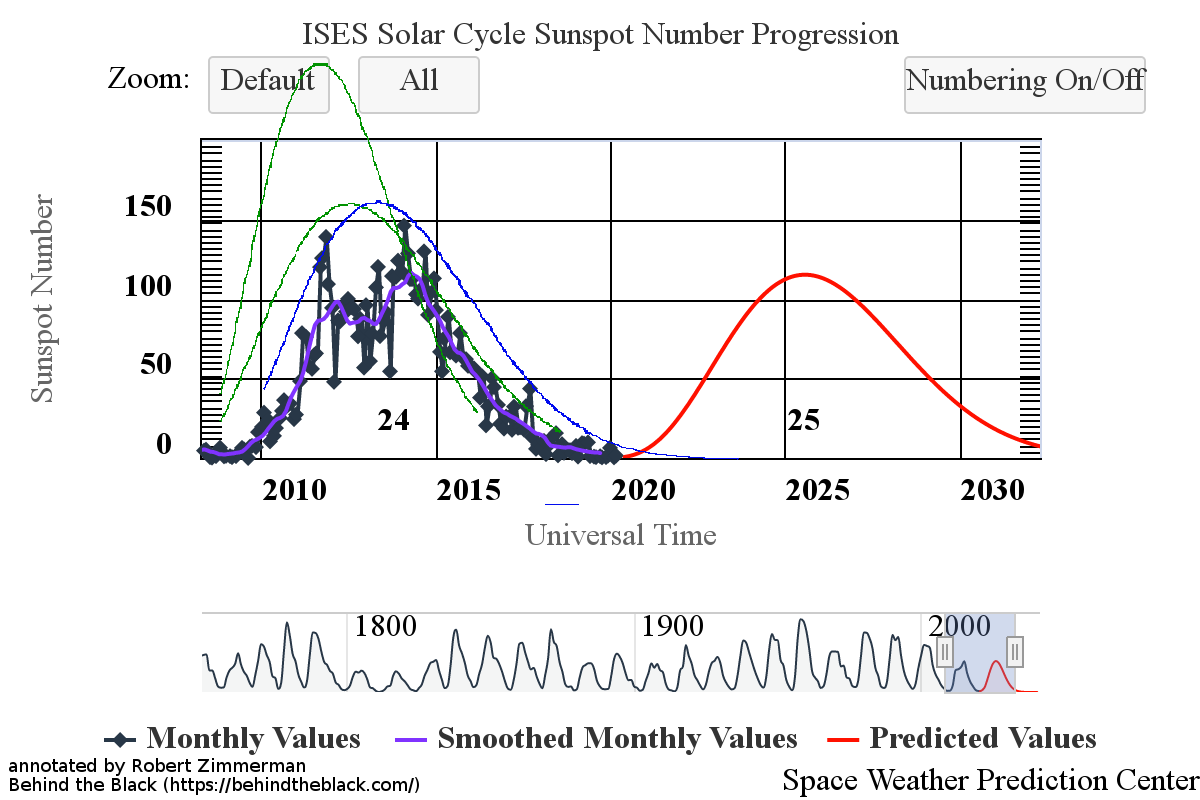 From this corrected graph it is obvious that the new prediction coming from NOAA expects an even weaker solar maximum in 2025 than the weak solar maximum that just passed in 2014. Readers should be aware however that this prediction does not represent a consensus among the solar science community, only the decision of NOAA’s Solar Cycle 25 Prediction Panel. There is evidence of some disagreement within the entire community about this prediction.

Future monthly sunspot updates will be based on this image above. As the sunspot cycle proceeds and NOAA slowly erases its prediction from their graph, I will put it back in, as you see it above. This way we will be able to see if their prediction was accurate, or indicated a bit of guesswork, as demonstrated by the previous three predictions for the last maximum.