The importance of small telescopes to science and civilization

Largest cluster of telescopes on Mount Lemmon, six visible with three just out of view.

On December 11, 2019 I was kindly given a personal tour by Alan Strauss, director of the Mount Lemmon Sky Center, of the telescopes located on the mountaintops of the Santa Catalina Mountains overlooking Tucson. Strauss runs the educational outreach program for the University of Arizona astronomy department and the Steward Observatory, both of which operate the mountaintop facility.

The telescopes, numbering almost a dozen, are in two groups, two telescopes on the peak of Mount Bigelow and the rest clustered on the higher peak of Mount Lemmon. None are very gigantic by today’s standards, with their primary mirrors ranging in size from 20- to 61-inches. For comparison, the largest operating telescope in the world on the Canary Islands is 409 inches across. Hubble has a 94-inch mirror. And the new giant telescopes under design or being built have mirrors ranging from 842 inches (Giant Magellan) to 1,654 inches (European Extremely Large Telescope).

Thus, the small telescopes in the Santa Catalinas generally don’t make the news. They are considered passe and out-of-date, not capable of doing the kind of cutting edge astronomy that all the coolest astronomers hunger for.

Yet, without them, we likely would not have future astronomers. “A graduate astronomy student is probably not going to get time on the big telescopes,” explained Strauss. “These are the kind of telescope they can get time on.” Universities in turn use these telescopes to train future astronomers by giving them the opportunity to do real research on a professional-class telescope.

As such, on Mount Lemmon there are telescopes run by universities in Minnesota, Florida, Tennessee, and even South Korea, several of which make their observing time available to other universities as well.

The Sky Center does its part by operating its own educational and outreach programs. First they run regular nightly programs for anyone who wishes to visit the site. Each program includes a simple dinner, a lecture, a tour, and a chance to see a bunch of beautiful astronomical objects through a large professional telescope. 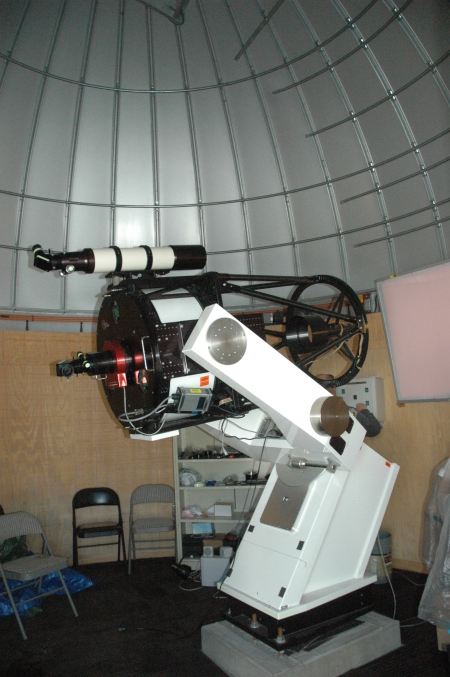 The Sky Center also runs a program where local elementary and high school students spend from two to four days on the mountain, studying all kinds of science while also putting together their own research projects.

The scope to the right, the Phillips 24-inch, is ideal for this program because it is quite simple to use. “It uses a virtual sky map on a computer screen,” explained Strauss, “The kids look and say ‘What’s that?”, click on it, and send the telescope to it. That’s incredibly empowering.”

The program also takes advantage of the presence of Arizona university students doing observations to help teach and inspire the grade-school children that come up to the mountain. “That is such an eye-opener for the kids,” he explained. “A graduate student, only a few years out of high school, can say, ‘It was like yesterday that I was you, and now I’m doing this! Let me show you a picture of a star exploding that I just took!'”

And while the Santa Catalina telescopes might be relatively small and are mostly devoted to education, they also are making a significant contribution to asteroid research, a contribution that might someday actually save a lot of lives on Earth. Using the 61-inch, 60-inch, 40-inch, and 30-inch telescopes on both Lemmon and Bigelow, the Catalina Sky Survey is one of ten different projects over the past few decades that have focused on locating all potentially dangerous Near Earth asteroids (NEAs) that might someday impact the Earth.

The graph above shows all the NEAs found since these surveys began in 1995. If you look close, you will notice that, since its inception, the Catalina Sky Survey has consistently found the majority of new NEAs each year, even though many of the other surveys use bigger telescopes and more sophisticated software. Strauss explained, “These guys are better, and the reason they are better because it is people looking at data, not an automated survey operated by a computer. Human judgment is better.”

For example, on a typical night the 60-inch survey telescope will spot about 3,000 objects. Software generally identifies all but about two dozen that are already known objects or phenomenon. At that point the night’s observer will manually go through those objects to find the new NEAs, usually about two or three per night.

The result is that of the three asteroids so far discovered in space that are known to have subsequently impacted the Earth, all were found by Catalina, and all three were found by the same observer, Richard Kowalski.

Almost certainly there will come a time in the future that a very large bolide will be discovered by these surveys, just prior to hitting the Earth. The odds are very high that it will be an observer at Catalina, using these passe small telescopes, who will make the discovery. That find will then make it possible to announce a warning. If the impact is headed toward the ocean, shoreline communities can be warned of a possible tsunami. If the impact might produce a shockwave that can break glass, residents can be warned to keep away from their windows and thus avoid injury from flying shards.

And most important, in the long run these small telescopes might someday find that giant asteroid heading towards Earth that needs to be stopped, and make that discovery early enough so that we will have enough time to plan a mission to do so.

Though I have written about this previously, what this tour of the Santa Catalina telescopes reaffirmed is that smaller and older telescopes should never be abandoned or thrown away. They are valuable, and can still make a significant contribution to civilization.

Nor am I the only one who acknowledges this fact. Several of the telescopes at this facility are named after some benefactor (Schulman, Phillips) who also recognized their value, and donated the funds to keep the telescope in operation.

Astronomy (and small telescopes) need more such benefactors. The facilities benefit our culture, increase knowledge, and most important, might someday also save us from destruction.