The press continues to lie about COVID-19 to generate fear 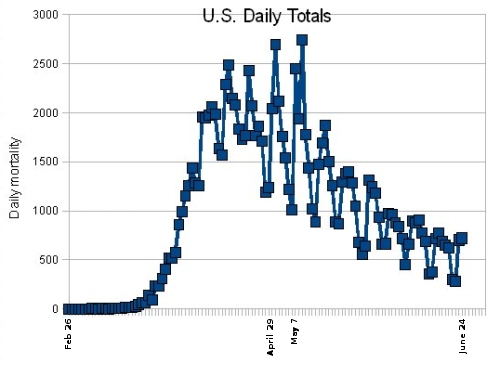 They just won’t stop lying: If you have been reading the mainstream leftist press, you are probably now under the impression that the COVID-19 epidemic is once again raging across the land, destroying whole communities while spreading out-of-control everywhere because some Republican governors thought it was now okay to come out of hiding.

The CNN article at the link above is typical, reporting in lurid detail how multiple states across the country are now experiencing record levels of new coronavirus cases.

Oh my! We are all gonna die!

Not. What the CNN article completely failed to mention is the number of deaths from COVID-19 taking place during this rise in new cases. Are you curious why? Could it be because, though the number of people now infected with the virus has skyrocketed, the number of deaths has remained largely flat, as shown by the graph above (data source here). The past two days has seen a slight uptick, but that is entirely within the range of the weekly ups and downs caused apparently by low numbers recorded over the weekends.

I am not the only one to notice this strange dishonest reporting, Nor is CNN the only culprit. This article at Just News noticed the same thing in a Washington Post report.

“Across the United States,” reported the Post, “more than 36,000 new infections were reported by state health departments on Wednesday — surpassing the previous single-day record of 34,203 set on April 25.”

Yet the article failed to mention that even while new infections are on the rise, new COVID-19 deaths are not.

This vital information gap in the media is causing some health policy experts to worry that fear about the coronavirus — evidenced, for example, by Wednesday’s sharp stock market drop — is not founded in facts, particularly about how the virus disparately impacts different age groups. The spreading of unfounded alarm, the experts fear, could risk deep harm to Americans’ livelihoods and mental health due to a prolonged, widespread shutdown. [emphasis mine]

This dishonest reporting however is par for the course from mainstream leftist outlets like CNN and the Washington Post. Having failed to overthrow Trump with the Russian collusion hoax and the Ukraine phonecall hoax, they are now working hard to gin up more panic and fear about COVID-19, thus allowing their partners in the fascist Democratic Party to use that fear to justify further power grabs, such as in Oregon, where Democratic governor Kate Brown has convened her Democratically-controlled legislature into emergency session for the sole purpose of suspending due process for up to sixty days.

It is all despicable and evil. That the number of actual cases is not rising in any significant way should be a sign of relief and hope. Not only are lots of people easily throwing off the virus with no problems, these flat death numbers combined with the rising new cases strongly proves once again that the virus is simply not that lethal to the general population, and it likely very comparable to the flu.

Relief and hope cannot be allowed however. That might mean that things can go back to normal, that freedom will once again ring out across the land, and that Trump might actually win in November. Heaven forbid. Better to destroy the country with lies and fascist dictatorships then let things unfold as they should, in a free nation.