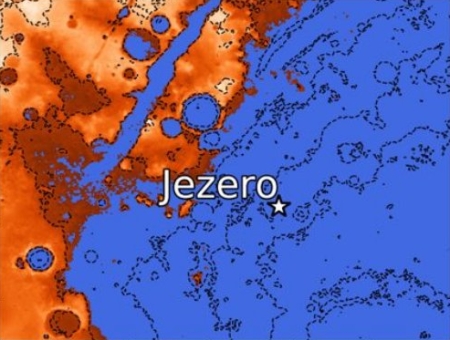 Other Mars-related abstracts of interest:

The Near Earth asteroid reports were equally intriguing. For example, one abstract [pdf] took a look at the ejection events that have been discovered at Bennu, finding that these events could explain the shapes of both both Bennu and Ryugu, with their thick equatorial ridge and pointy north and south poles.

A different abstract [pdf] proposed that these ejection events might be caused by the stresses caused by the hot-cold temperature swings on Bennu.

We find that the magnitude of stresses induced via thermal cycling is sufficient to drive thermal fatigue in Bennu’s boulders, and that layered boulder morphologies observed are consistent with fatigue-driven exfoliation. We also find that the predicted sizes and speeds of particles that may be ejected during exfoliation events are consistent with observed particle ejection events at Bennu, indicating that thermal fatigue is a viable mechanism for
generating these events and for, generally, producing asteroid activity.

Exfoliation is a geological process on Earth where layers of material break off the surface of boulders over time due to the temperature changes between winter and summer and day and night, usually related to the freezing and thawing of ice.

Another abstract [pdf] reported on radar observations on one of the four known asteroid binaries where the two objects are essentially of equal mass. The image below shows the radar images taken of asteroid 2005 UP156 on June 18, July 5, and July 7 in 2017. 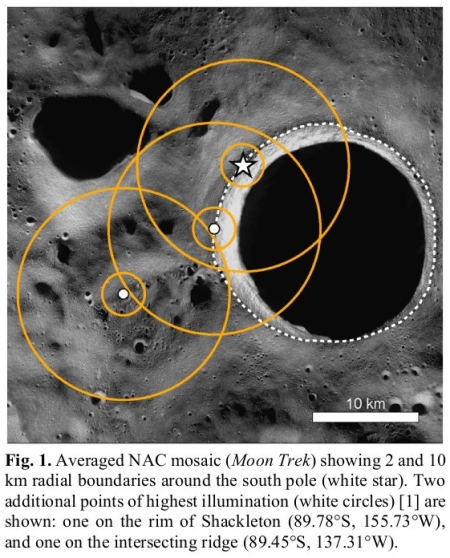 Finally, one abstract [pdf] reviewed the possibilities of moon walks during the proposed Artemis-1 manned mission to the Moon’s south pole in 2024, mapping out several potential areas where the astronauts could explore.

The map to the right is taken from that abstract. The circled crater is Shackleton. The point on the crater’s rim noted as a point of highest illumination is the same spot studied in an abstract yesterday of the daily illumination on Shackleton’s rim.

This report also comments on the steep slopes surrounding the south pole, adding that “a rover would be a valuable asset to the Artemis mission.”

Considering Congress has not yet appropriated money for the 2024 manned lunar mission, that Artemis is vastly over-budget and behind schedule, and that a rover was never included in any of this work or budget, I seriously doubt this recommendation will bear fruit, as necessary as it might be.