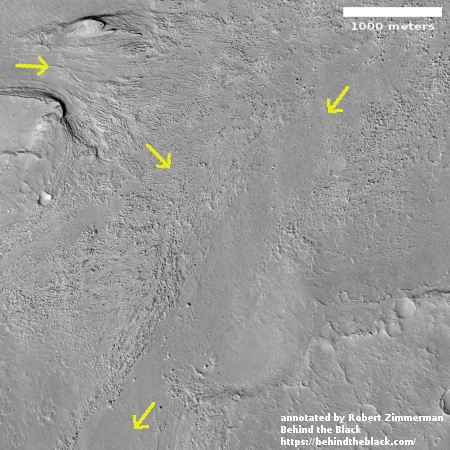 Each month the Mars Reconnaissance Orbiter (MRO) science team highlights with captions about four out of the 300-500 new images released that month.

Of the four captioned images in February, the first was entitled “Almost Like Water,” and focused on the waterlike nature of the lava flow. The image on the right is a cropped and annotated section of that featured photograph, with the yellow arrows indicating the flow directions.

The lava appears to have flowed smoothly around obstructions, almost like water, forming streamlined islands. In the southern part of this image, a branch of the flow diverts around a small crater, and eventually rejoins the main part of the flow. [Visible in the full photograph] Irregular-shaped ring structures appear on the northern end and are related to the volcanic activity that formed the flows.

You can see an example of one of those islands near the top of the above image.

This is hardly the only MRO image showing such flows. In fact, the February image release included a bunch, some of the more intriguing of which I highlight below. These lava flows are seen in many different places on Mars, in a wide variety of geological settings, facts that suggest that volcanic activity was once very widespread and ubiquitous on Mars. 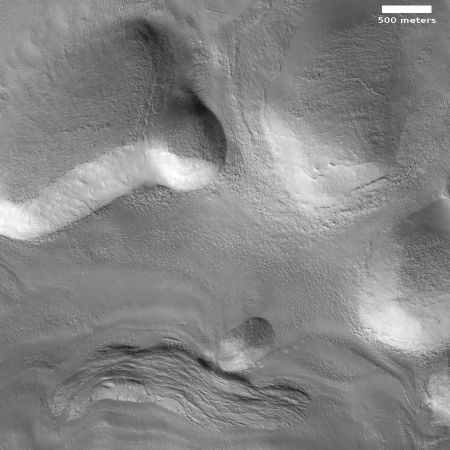 For example, the first image above is located in the transition zone between the rough Martian southern highlands and the vast northern lowlands where an intermittent ocean might have once existed. This part of the transition zone is also located to the west and south of Mars’s giant volcanoes.

The flow highlighted in the image to the right, cropped and reduced to post here, is also located in that transition zone, but on the other side of the planet, far from those gigantic volcanoes. Like the first image, it shows lava flows that seem to stream around older obstructions, such as the mound near the center bottom. The image also shows the lava flow working its way through a gap in the larger mounds near the top of the photograph. 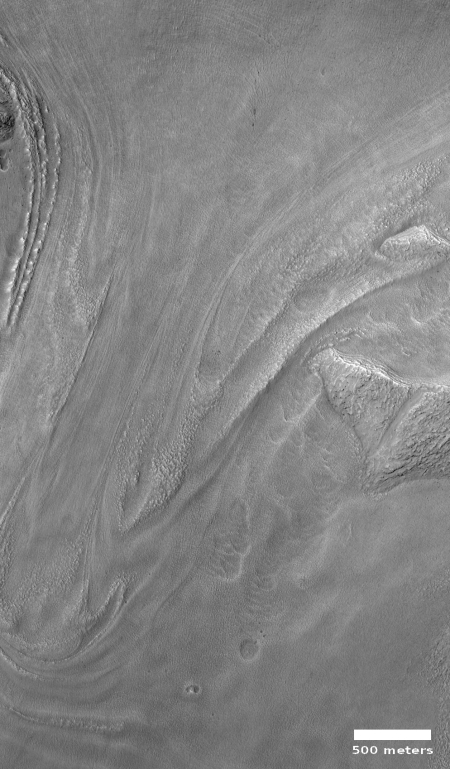 Nor are all of the Martian flows confined to that transition zone. The third flow, shown in the image to the right and rotated, cropped, and reduced to post here, is found deep in the southern highlands, inside a large crater dubbed Baltisk Crater. It flows down from the crater’s north wall. Unlike the other two flows, this one might not be from lava, but instead have resulted simply from a landslide off the crater wall, and looks flowlike because of the presence of water within the material. Or to put it more simply, this has a waterlike flow because there was possibly water there.

Still, it has some of the same features. For example, it flows around some obstacles in the image’s center right. Yet the shape of the flow seems to more resemble a glacier than lava. You can also see multiple flows layered on top of each other, as if the initial flow was later covered by later flows.

The similarities are probably due to the overall influence of Mars itself, its lower gravity, its make-up, the history of its global geology. Yet, each must be looked at closely because they also are likely to have different geological origins. 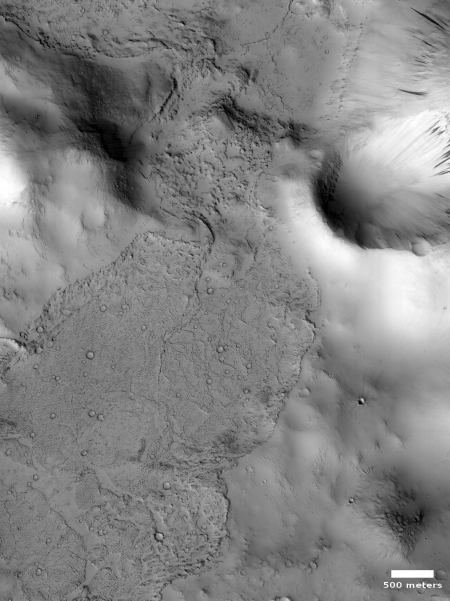 For example, the fourth and last example today, shown in the picture on the right, rotated, cropped, and reduced to post here, is of a lava flow just on the edge of the northern lowlands, but also located near Mars’s large volcanoes. Unlike the three previous highlighted flows, the lava here appears rough and coarse. And though its northward flow is guided like the other flows by the gap between the mound and crater near the top of the photograph, it looks more like lava flowing over the top of an older terrain, leaving behind a new higher layer.

Why the differences? As I say, each of these flows has a different geological history, unique to it. At the same time, each is grounded in the overall environment of Mars, using the same laws of nature found on Earth but arranged quite differently because of the planet’s own uniqueness, different from Earth.

The result are flows that look somewhat alike, but are each very unique.

This pattern by the way extends itself to all things. Consider the myriad and unimaginable variations that the universe presents to us. Though the laws of nature are consistent everywhere, each location on every planet or moon or asteroid or comet will form and evolve uniquely, because of the different masses, chemistry, and temperatures of those planets, moons, asteroids, or comets. None are going to be much like any other, though there might be some recognizable resemblances between them.

The possibilities are mind-boggling, especially because we have only in the past half century begun to scratch the surface of this infinite variety.