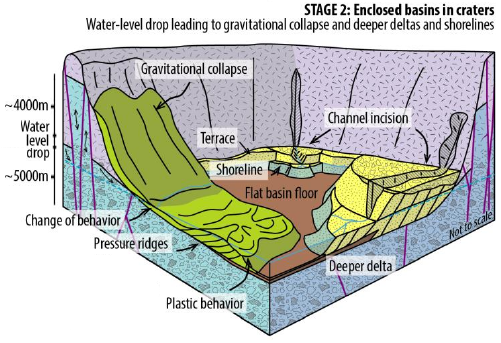 A science paper released today and available for download [pdf] cites evidence from about two dozen deep impact craters located from the equator to 37 degrees north latitude that Mars has a ground ice table at an elevation that also corresponds to other shoreline features. From the abstract:

Observations in the northern hemisphere show evidence of a planet‐wide groundwater system on Mars. The elevations of these water‐related morphologies in all studied basins lie within the same narrow range of depths below Mars datum and notably coincide with the elevation of some ocean shorelines proposed by previous authors.

The image above and on the right shows the middle stage of their conceptual model for the evolution of these deep basins and how that evolution results in many of the geological features seen in many places on Mars, such as the features I have highlighted on Behind the Black previously here and here.

These observations suggest that only the deepest basins, those with floors deeper than -4000m below the Mars datum, intercepted this deep water-saturated zone. Furthermore, they point towards the existence of a planet-wide groundwater table between -4000m and -5000m during the past Martian history. This evidence fully or partially supports the models proposed by Andrews-Hanna and Lewis [2011]; Michalski et al. [2013], which predicted regional to global groundwater upwelling and the existence of a water saturated zone around -4000m below Mars datum respectively. Basins with bases deeper than -4000m below Mars datum intercepted the water-saturated zone were predicted by the model of Michalski et al. [2013] and exhibit evidence of groundwater fluctuations.

The analysis of these morphologies shows that the topographic elevation of the water surface fluctuated at least between -4000m to -4800m, but at a certain point in time it became sufficiently stable to allow the formation of deltas. The range of water level variations that we estimated from several geological observations is of the same order of magnitude as the one estimated by the model of Horvath and Andrews-Hanna [2017] for Gale crater. 15 of the 24 deep basins analysed in our study, show clear evidence of the existence of deltas or stepped deltas. Other morphological features also reinforce the idea of a stable water table, for example the lowest part of the channels and the highest part of the terraces are notably at the same elevation as the deltas. Other morphologies that resulted from groundwater processes are sapping valleys which, given the lack of surface drainage recharge and the absence of breached rims, represent the most compelling evidence that these basins were groundwater-fed. The formation of sapping valleys at higher elevations than the groundwater basal level could have been possible due to the presence of the “dike confined water” that can make the groundwater level shallower than the basal one. This concept is introduced for the first time in the Martian geological literature by the proposed conceptual model. In some craters we found stepped retrograding deltas indicating that over time the water level stabilized at different elevations and when the water level fell, the deltas were partially carved by channels and destroyed by erosion. [emphasi mine] 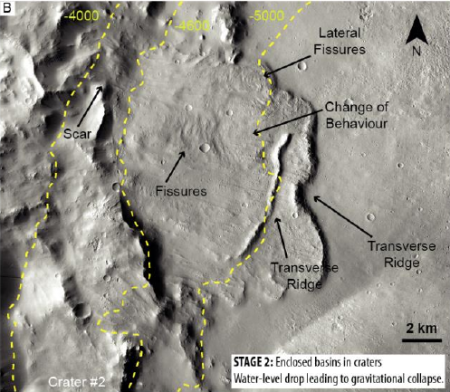 The highlighted quotes illustrate three important facts about Mars’s water history. First, it apparently did have a period when water was stable at the lower elevations of the surface. Second, the elevation for that stable water level varied over time. The image to the right, from the paper, illustrates this change in water level over time. As the water level dropped, it was no longer there to provide support and buoyancy for the cliffs on its edges, and they collapsed, producing the long avalanche tongues we see frequently on Mars, such as with this image.

These features fit well with past theories about the existence of an intermittent ocean, as well as the fact that though research has found ample evidence of a shoreline, the evidence has also not found a single shoreline everywhere, as you would expect if the ocean was big and long-lived. Instead the evidence suggests areas of intermittent wetness, some large, some small, some deep, some shallow, all producing shorelines at varying heights as this wetness mostly receded.

The third take-away from this paper however is possibly the most important. The evidence suggests that this deep groundwater water table (as ice) almost certainly still exists at all latitudes, though almost entirely underground. From a future explorer’s perspective, this data reinforces the possibility that water will be accessible across much of the Martian surface. All you will have to do is dig a well, something humans have been doing on Earth for eons.