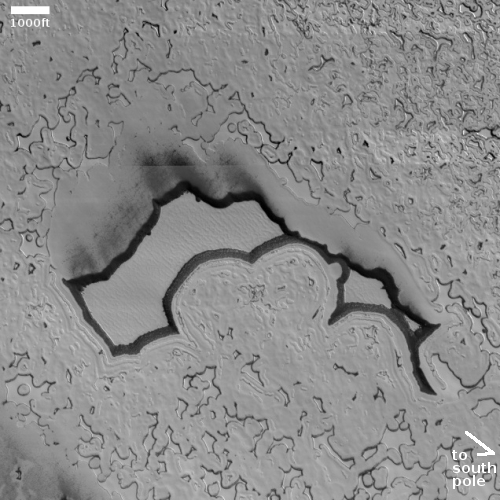 Time for an especially cool image! The photo to the right, taken on February 13, 2021 by the high resolution camera on Mars Reconnaissance Orbiter (MRO) and cropped and reduced to post here, shows some mesas on the south polar ice cap of Mars.

What makes those mesas cool (literally and figuratively) is that they are thought to be made up entirely of dry ice, part of the thin but permanent frozen carbon dioxide cap in the south. As explained to me by Shane Byrne of the Lunar and Planetary Lab University of Arizona, who requested this image from MRO,

[These mesas are] unusually thick compared to other dry ice mesas (a common landform in the residual ice cap). I only have the lower resolution laser altimeter data to go off for heights here (we may get a stereo pair next year), but from that it looks like 13 meters thick.

That’s about forty feet high, from base to top. In length, the largest mesa on the left is about a mile long and about 1,500 feet wide, on average. And it is made entirely of dry ice!

The red cross on the map below shows the location of these mesas on the south pole ice cap. 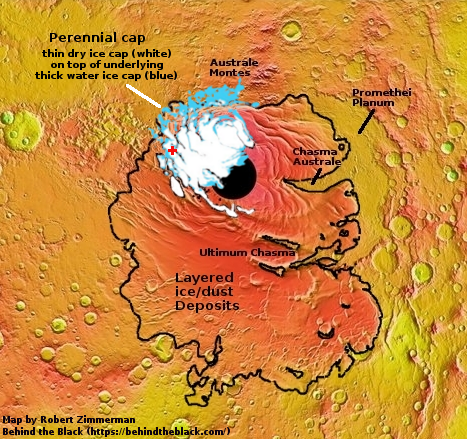 To understand the context of these dry ice mesas requires knowing a bit more about the Martian poles. While both poles each winter get covered by a thin mantle of dry ice snow about six feet deep, which disappears with the coming of spring, the south pole also has an additional residual and permanent thin cap of dry ice, about six to ten feet thick, that sits on top of the permanent water ice cap (shown in blue on the map).

Why the north polar cap does not have any permanent dry ice while the south polar cap does is a puzzle that scientists cannot yet explain. “It’s been quite a mystery,” notes Byrne. At present scientists think it must have something to do with the different elevations of the two poles (the north sits lower) which causes a different atmospheric pressure and different weather patterns, combined with the measured but unexplained higher brightness of the dry ice in the south. As Byrne adds, the brightness means that “in the south it’s easier to absorb less solar energy and start accumulating a permanent CO2 cap.”

The mesa itself in the image above is actually a leftover of what scientists believe was once a much thicker dry ice cap, suggesting (as does other evidence) that the cap is losing dry ice at this time.

The black cliffs of these mesas appear so black partly because of the lighting contrast. As Byrne explained to me,

The bright ice is extremely bright! The black cliffs only look dark by comparison as the images are contrast enhanced. The cliffs are probably about as bright as martian dust deposits (usually considered the bright stuff on Mars).

The cliffs are darker than the plateau above or the surrounding terrain likely for other reasons. Byrne thinks the cliffs are older. “The bright surfaces are fine-grained frost,” he explained. “As the ice ages, the ice grain size increases and the ice gets darker.”

In this sense the cliffs are giving us a window into the ice cap’s past. Like all sedimentary layers, if scientists could delve and date the different layers seen in these cliffs they could likely unravel the mesa’s entire history, which in turn would tell us much about the entire climate history of Mars.

Delving and dating these cliffs however is going to have to wait until a time when humans walk on Mars routinely.

While that time might seem centuries away, with determination and luck that time might actually arrive before the youngest person on Earth today dies. Know anyone who might want to go?