Cool image time! The photo to the right of two images taken by the high resolution camera on Mars Reconnaissance Orbiter (MRO) was posted as a captioned image by the orbiter’s science team today.

This crater, dubbed the Happy Face Crater because of the shape of the blobby features within it, is located on the south pole ice cap of Mars, about 200 miles from the south pole itself.

Today’s caption noted how these pictures, taken nine years apart, illustrate the change going on at the Martian south pole.

The “blobby” features in the polar cap are due to the sun sublimating away the carbon dioxide into these round patterns. You can see how nine years of this thermal erosion have made the “mouth” of the face larger. The “nose” consisted of a two circular depressions in 2011, and in 2020, those two depressions have grown larger and merged.

While this caption noted the importance of studying these long term changes in order to understand the evolution of Mars’ climate and geology, it did not give the very specific discovery these changes suggest for Mars globally, a discovery that is actually very significant.

The two ice caps of Mars have some fundamental differences, all presently unexplained. The similarities are obvious. Both have permanent caps of water ice that are presently believed to be in a steady state, not shrinking or growing. Both each winter get covered by a thin mantle of dry ice that sublimates away completely with the coming of spring.

The differences are more puzzling, as shown by the maps of the two poles below. 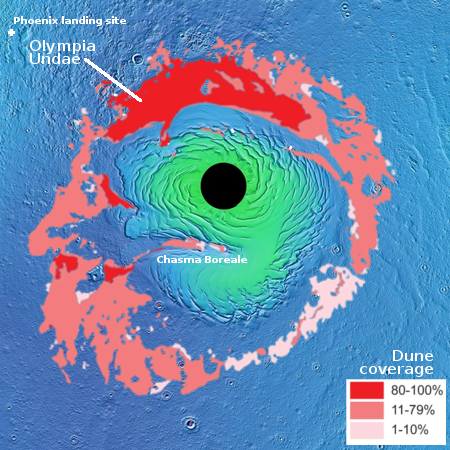 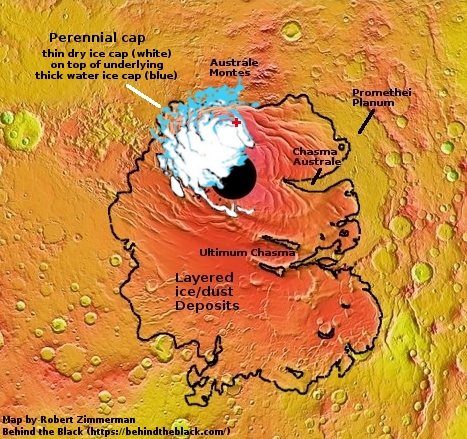 In the north, shown first on the right, the permanent pure water ice cap is mostly indicated by the green areas. Beyond this cap a vast sea of sand dunes surrounds the cap.

The south pole, shown in the second map to the right, is more complicated. First, the permanent pure water ice cap is smaller, as indicated by the areas of blue and white. Second, there are no sand dune seas. Third, that smaller water ice cap sits on top of a much larger cap of mixed dirt, debris, and ice, dubbed the layered deposits. In the north such a layer doesn’t exist, or if it does exist under the pure ice cap, it doesn’t extend much beyond it, as it does in the south.

The most significant difference between the two poles however is the presence in the south of a small permanent cap of dry ice, laying on top of the pure water ice and indicated in white. At the north pole there is no permanent dry ice cap, just the seasonal dry ice mantle that comes and goes with the seasons.

Why does the south pole have a permanent cap of carbon dioxide? How is it that frozen carbon dioxide can survive year round in the south but not in the north? The answers to these questions remain a mystery, but the changes shown in Happy Face Crater (its location indicated by the red cross) over about five Martian years reveal something important about that permanent CO2 ice cap: It appears to be going away.

The changes suggest a steady and slow sublimation and decay of that permanent cap of frozen CO2 across seasons. As the two pictures only cover a few Martian years, these changes don’t really tell us the long term rate of decay. Furthermore, the time period is so short there is uncertainty whether this trend is permanent or merely a short term fluctuation.

Regardless, this permanent carbon dioxide ice cap might exist in the south, but the climate conditions on Mars presently do not appear favorable to it, and these two photos demonstrate that it is presently not in steady state, as are the water ice caps, but is at this time slowly getting smaller from year to year.

The shrinking of this permanent carbon dioxide cap means that the atmosphere of Mars is right now gaining CO2 (just like the Earth!). How this will change that Martian atmosphere and the red planet’s overall climate is not known. Moreover, we will likely not know for quite awhile, because we simply don’t have enough information to put together a reasonably accurate model of the Martian atmosphere. The climate models that exist for Earth’s climate continue to do a poor job of predicting the changes in our home planet’s global climate, and we know far less about Mars.