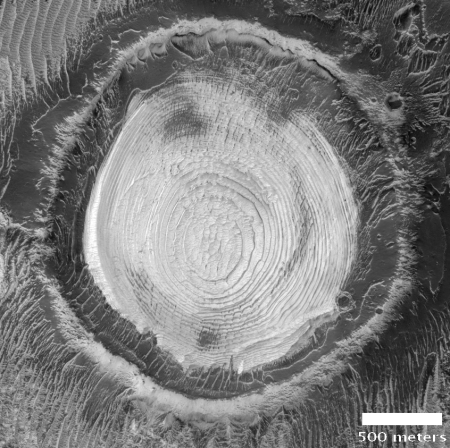 Cool image time! In researching my piece last week on the glaciers of Mars I had wanted to include a picture of a typical concentric glacier-filled crater, the most widespread glacial feature on the Martian surface, found in a band at latitudes between 30 and 60 degrees. (You can see the example I found at the link above, near the end of the article.)

To find that picture I searched the Mars Reconnaissance Orbiter (MRO) archive. Among the images I found was a captioned image taken very early in MRO’s mission showing a crater with concentric rings very similar to the concentric glacial-filled craters. The image at the right is that crater, the image reduced and cropped to post here. As described in that caption,

Moving out from the crater center, the layers appear to be stair-stepped so that each layer is slightly lower than the previous one; the innermost layers are the youngest, deposited on top of a stack of sediments. The concentric pattern could be simply due to each layer being eroded slightly more than the one below it, but another factor may be the shape of the layers. If each layer draped over the interior of the crater and the region was eroded to a nearly flat surface, the layers would appear as a succession of rings. Topographic data of sufficient resolution would enable us to distinguish between these two models

Since this crater was located at on 1 degree south latitude, essentially at the Martian equator, if it was glacial it would be far south of those glacial bands, and in fact be the most equatorial of all. Based on the all the research I’ve reviewed on Martian glaciers, this shouldn’t glacial.

One clue that it was not glacial was the erosion pattern, with the highest feature at the crater’s center and the terraces descending concentrically outward to the crater’s rim. The glacial craters at higher latitude tended to be more flat, and seemed to instead descend toward the crater’s center.

The caption however did not say one way or the other. Moreover, it has been written back in 2007, before scientists had known much about the glacial features on Mars. If this was glacial it would be a big deal, as it was at the equator. I emailed Colin Dundas U.S. Geological Survey’s Astrogeology Science Center in Arizona, who wrote the caption and has been helpful previously. He confirmed the non-glacial nature of this crater.

That’s a different feature–it’s a set of rocky layers that lined the inside of an impact crater and were then planed off by erosion, producing a series of concentric rings. It’s distinct from the classic “concentric crater fill” that is due to ice creep and flow.

He also mentioned that there have been published reports of other equatorial craters that were ice-rich. I have located two stories suggesting the existence of glaciers close to the Martian equator.

In both stories the presence of ice is only indirectly inferred. There is no direct evidence of water. This does not eliminate the possibility of equatorial Martian ice, but the science here remains very uncertain.

Meanwhile, the image above with its wedding cake mesa in the center of a crater remains quite fascinating. Assuming that the fill in the crater was once flat, and then eroded away to leave behind that central mesa, why has this erosion formed this concentric pattern? The theories mentioned in the caption are not very clear on this point. To repeat, the science is very uncertain.

The Martian landscape continues to amaze.