The glaciers of Mars

For the future colonists of Mars, the question of finding water will not be that much of a problem. Not only have planetary geologists mapped out the existence of extensive water-ice in the Martian poles, they have found that the planet apparently has widespread glacier deposits in two mid-latitude belts from 30 to 60 degrees latitude.

The question will be whether those Martian settlers will be able to easily access this water. The data so far suggests that much of the Martian underground water at high latitudes is likely mixed with dust and debris. Extracting it might not be straightforward. There are hints that the ice table at latitudes about 55 degrees might be more pure, but could be somewhat deep below ground, requiring the settlers to become miners to obtain their water. Moreover, all these high latitude locations are in environments that are more hostile, and therefore more difficult to establish a colony.

What about the glaciers? The global map of Mars above, reduced and annotated to post here, shows what are believed to be extensive glacial deposits at lower latitudes, and comes from a recently published paper on the subject. The different colors indicate the different types of glacial deposits the scientists have identified.

Green and yellow indicate what scientists call lineated valley fill (LVF) and lobate debris aprons (LDA) respectively, glacial deposits found in the transition zone between the southern highlands and either the northern lowland plains or the basins of the southern hemisphere, Hellas and Argyre. These glaciers are in many ways most similar to glaciers found on Earth, flows heading downhill along natural geographic features.

The paper which included this map focused on describing a new glacial feature, something they dubbed valley fill deposits (VFD), that they had found so far in only one place, as indicated by the black square on the map.

The photograph below and on the right, reduced and cropped to post here, is from figure two of the linked paper. 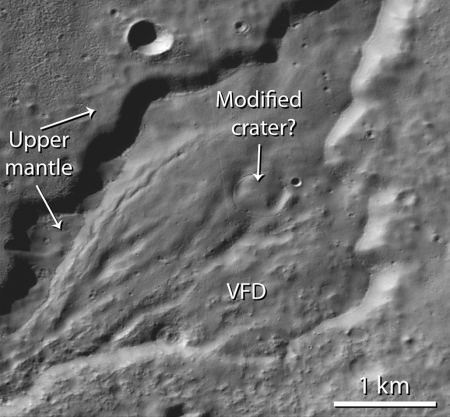 VFD refers to valley fill deposit, a buried glacier found within a valley system. From the caption:

VFD with longitudinal furrows. Note the marked circular feature which may represent a filled impact crater, and the adjacent small unmodified and fresh impact crater.

In the case of this newly found type of Martian glacier, the paper proposes that these glaciers formed as a result of the impact that formed the nearby 22-mile-wide Tarq crater about 410 million years ago. According to Solmaz Adeli of the German Aerospace Center (DLR), Institute of Planetary Research in Germany, and the lead author of the linked paper,

The impact happened into a surface covered by ice, or into a shallow subsurface ice layer. The impact event caused ice particles and surface solid material to be distributed over the surrounding area, including a valley system. Most of this icy-mixture has been sublimated away, but the deposit which fell into the valley has been protected by the valley walls. In addition, the morphology of the valley allows the deposition of a lag of dust and debris on top of the ice deposits, which then preserved the deposit from sublimation.

From the perspective of geologists, these different glacier types all have important distinctions that affect their formation and existence. To the ordinary future settlers of Mars, however, these differences are less important. What does matter is that they all suggest the presence of buried water-ice in many locations throughout the lower mid-latitudes of Mars.

Of course, there remains some uncertainty whether these features indicate the presence of buried glaciers. Sand and debris hides the ice from direct view.

The planetary researchers are fairly confident, however, that these features are glacial, based on data obtained from a variety of instruments and techniques. First, their visual shape, as photographed by several different orbiters, is reminiscent of the slow downward flowing glacier. Second, altimeter data shows that these features often have convex shapes as well as fractures and crevices both perpendicular and parallel to the flow direction, also reminiscent of glaciers. Finally, radar data from one instrument on Mars Reconnaissance Orbiter (MRO), designed to look for ice below the surface, confirms the presence of buried ice at those locations where it has looked.

The genesis and decay of these glaciers is directly related to the large climatic changes that scientists believe Mars has undergone over the eons.

While the rotational tilt of both the Earth and Mars are presently about the same, 23 and 25 degrees respectively, Mars’s tilt changes far more than the Earth’s. Over time that tilt, also called obliquity, can range from 10 to 60 degrees, with the tilt being more than 25 for most of the planet’s history. Some planetary geologists theorize that when the tilt was greater than 30 degrees the planet’s icecaps begin to melt, with much of that water being distributed to the mid-latitudes. From the linked paper:

Over the past 20 [million years], Mars’ obliquity variations caused significant changes in the Martian seasonal cycles. Head et al. (2003) hypothesize an ice age between 2.1 and 0.4 [million years] ago, when the obliquity exceeded 30° and water ice was removed from the polar regions and transported to midlatitudes, where a thin mantle of ice‐dust covered the surface. The end of this ice age is recorded by the rapid accumulation of north polar layered deposits resulting from the retreat of ice from the mid-latitudes

Another research paper put it this way:

Mars is at present in an ‘interglacial’ period, and the ice-rich deposits are undergoing reworking, degradation and retreat in response to the current instability of near-surface ice. Unlike the Earth, martian ice ages are characterized by warmer polar climates and enhanced equator-ward transport of atmospheric water and dust to produce widespread smooth deposits down to mid-latitudes.

There are many uncertainties about this theory. For example, why have glacial features only been found along these mid-latitude belts? This Martian ice-age model, based on the changes in Mars’ rotational tilt, does not explain the specificity of the mid-latitude belts. Why are the edges of these belts so sharp? Wouldn’t you expect the presence of glaciers to slowly tail off as you move north and south? We don’t however. Some unknown aspect of the Martian climate and obliquity over time has left these glaciers in these specific belts, even as they are presently slowly sublimating away.

Nonetheless, the theory suggests that Mars has undergone many past ice-age cycles as its rotational tilt shifted back and forth, much as the Earth has experienced past ice ages due to changes in its own rotational tilt. Unlike Earth, changes in the Martian obliquity were much more drastic. And with each of these cycles, the theory says the planet’s water-ice was redistributed across Mars from pole to mid-latitudes and back again.

At present, according to this theory, Mars is presently between ice ages, with the ice in the mid-latitudes decaying and returning to the poles. 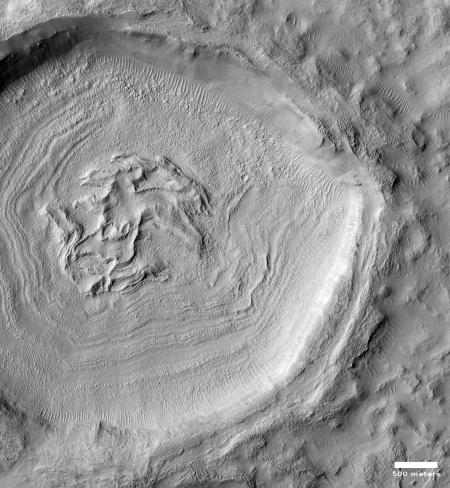 For future explorers, the problem will be this: How to get at this buried ice? Based on the accumulated research, the glaciers inside craters, dubbed concentric crater fill, are found most widely within these belts. Moreover, according to Adeli, “I would choose concentric crater fill [glaciers] because they are deposited in craters which makes is easier to estimate the depth of the deposited material.” Adeli also notes that craters tend to be traps for windblown dust, which in turn can act to protect the glacial ice, since the ice can only sublimate away from the top, and that top is well covered with that windblown dust.

To the right is one example of this type of crater glacial fill, located at about 32 degrees north latitude, taken by the high resolution camera of Mars Reconnaissance Orbiter (MRO) in April 2014. I have rotated, cropped, and reduced the image to post here.

Thus, future Martian colonies might not be built in caves, but along the inside walls of these mid-latitude craters, where it will not only be relatively easy to build a base, but have water ice accessible nearby.