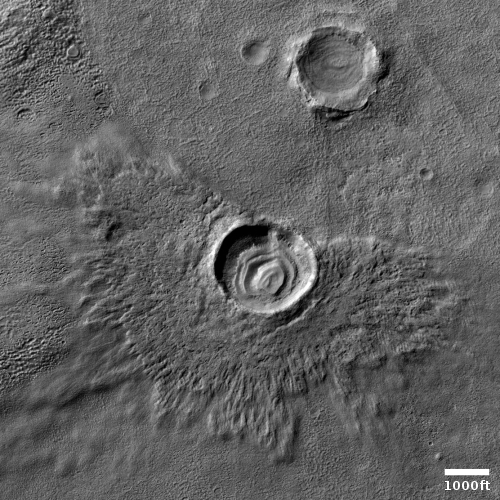 Cool image time! The photo to the right, cropped and reduced to post here, was taken on April 5, 2021 by the high resolution camera on Mars Reconnaissance Orbiter (MRO), and shows a particularly unusual crater in the southern mid-latitudes on the eastern edge of Hellas Basin.

This region east of Hellas is where scientists have spotted many features that suggest buried glaciers. The terraced material inside this crater, as well as the splattered material surrounding it on three sides, are examples of such glacial material. You can also see similar glacial features, though less pronounced, inside the crater to the north.

The global map of Mars below marks the general location of this crater by a blue cross. 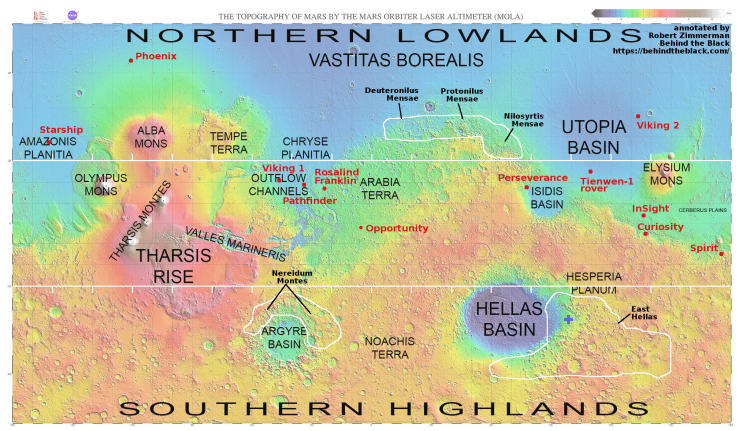 The areas bordered by white are regions where many many glacier features are found. The two white hatched lines at 30 degrees latitude, north and south, indicate the equatorial region where few such ice features are found, suggesting a surface that is arid and dry.

The main question invoked by this image however is the wing-shaped splat emanating out from the crater on its east, south, and west sides. Why not on the north?

My guess is that the crater impact just to the north occurred after this crater, and when it hit its own splat obliterated the northern splat of the southern crater. That is just a guess of course.

Regardless, the geological events that created this crater also created something reminiscent of the intelligent bird god Garuda from Buddhist and Hindu tradition. And since we now know that flight is possible on Mars, who knows what strange things might someday be found there.