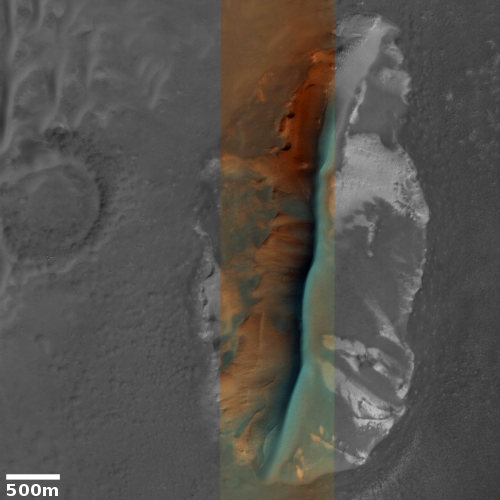 Cool image time! Last week the MRO science team posted a new captioned image entitled “Bright and Dark Dunes” featuring a particularly large single dune in the floor of a 25-mile-wide unnamed crater located at about 68 degrees south latitude. The photo to the right, rotated, cropped, reduced, and color enhanced to post here, shows that dune. According to the caption, written by Colin Dundas of the U.S. Geological Survey’s Astrogeology Science Center in Arizona,

This image shows a large sand dune with bright patches. Martian dunes near the poles often have bright patches in the spring, when seasonal frost is lingering. However, this image is from late summer, when frost is long gone. What is going on here?

A close-up look with [MRO’s high resolution camera] provides some clues. The bright patches are made up of large ridges that look like wind-blown bedforms. Additionally, the bright patches are yellowish in the infrared-red-blue image. In enhanced color, most sand on Mars is blue but dust is yellow. This suggests that the bright bedforms are either built from, or covered by, dust or material with a different composition.

Thus, the bright patches reveal either aspect of the dune’s underlying structure, either inherent in the bedrock itself, or the texture of its surface that allows it to hold more dust. As Dundas adds, “I think more study would be needed to determine the answer in this particular case.”

There are other aspects of this dune that can be seen by a look at the wider view afforded by MRO’s context camera below. 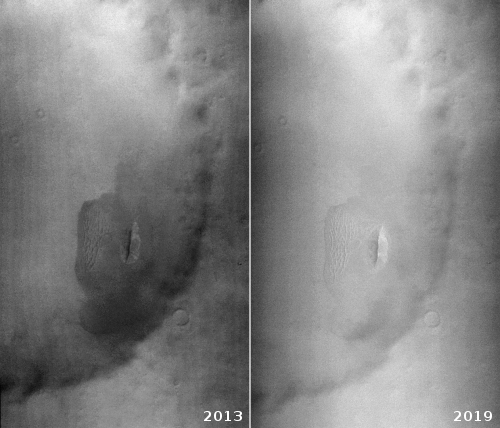 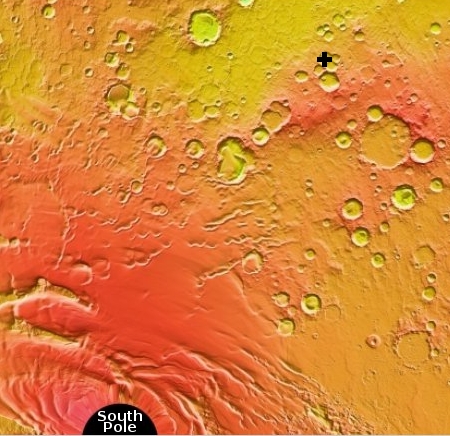 The photos to the right were rotated, cropped and reduced to post here. Both were taken in the early autumn on Mars, just before the seasonal dry ice snow begins to fall and cover everything in the high latitudes above 60 degrees with a mantle of CO2.

Why then was the dark splotch that surrounds the dune lighter in 2019? According to Dundas:

The [2019] image is from after the planet-encircling dust storm of 2018, which may have provided a dust coating. It’s quite likely that there are real brightness variations on the surface between the images, but there can also be differences in atmospheric dust that reduce the apparent contrast.

In other words, while 2018’s dust storm might have put a layer of dust on the dark areas to lighten them, the later image might be lighter overall because of there is a different amount of dust in the atmosphere above that would change the 2018 image’s contrast.

Why there should even be a large black splotch surrounding this large dune however remains unsolved, though the dune in this crater with a dark apron around it seemed vaguely reminiscent to me of features in a different crater — located close to the equator — which scientists think might be evidence of inactive hot springs.

The black cross on the overview map to the right marks the location of today’s image. It is about 1,000 miles south of the pole and sits in Mars’ southern cratered highlands.