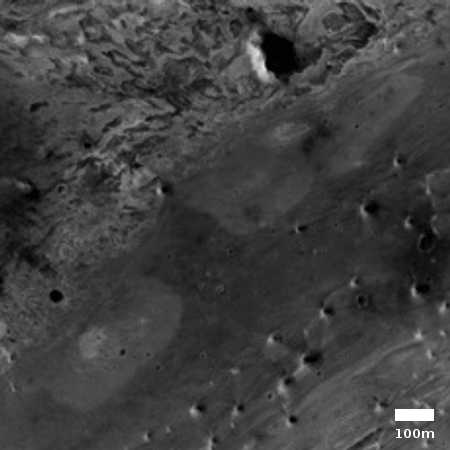 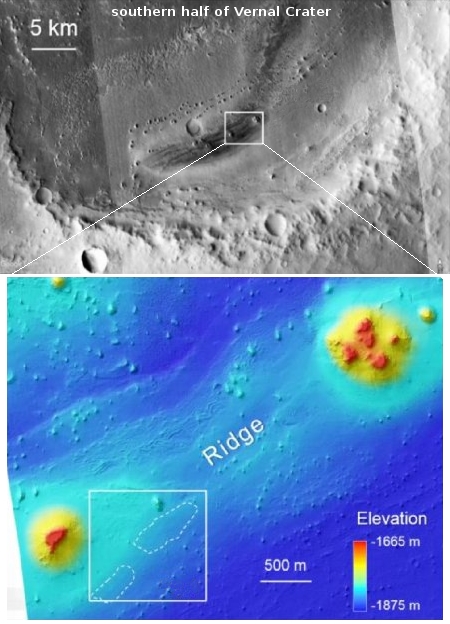 Cool image time! In prepping my report of the interesting abstracts from Friday of the cancelled 51st annual Lunar & Planetary Science conference (to be posted later today), I found myself reading an abstract [pdf] from the astrobiology session about the possibility of now inactive hot springs on Mars! This was such a cool image and possibility I decided to post it separately, first.

The top image to the right, cropped and expanded to post here, was taken by the high resolution camera on Mars Reconnaissance Orbiter in 2009. It shows some dark elliptical splotches inside the floor of a crater dubbed Vernal. The second image to the right, taken from the abstract, shows the context, with the top image a wide shot showing the southern half of Vernal Crater where these features are located, and the bottom image zooming into the area of interest. The white box focuses on the elliptical features seen in the first image above. From the abstract:

The elliptical features consist of concentric halos of high but varying albedo, where the highest albedo in each occurs in a small central zone that mimics the shape of the larger anomaly. Each feature is also traversed by circumferential fractures. Several similar tonal features extend for 5-6 km, on stratigraphic trend with the elliptical features. Hypotheses considered for the origin of the elliptical features included springs, mud/lava volcanoes, pingos, and effects of aeolian erosion, ice sublimation, or dust, but the springs alternative was most compatible with all the data.

The abstract theorizes that the small ligher central zone is where hot water might have erupted as “focused fluid injection” (like a geyser), spraying the surround area to form the dark ellipses.

I must emphasize that this hypothesis seems to me very tenuous. We do not really have enough data to really conclude these features come from a formerly active hot spring or geyser, though that certainly could be an explanation. In any case, the geology is quite intriguing, and mysterious enough to justify further research and even a future low cost mission, such as small helicopter drone, when many such missions can be launched frequently and cheaply.