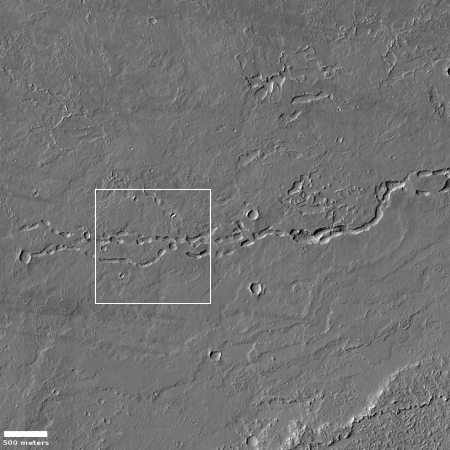 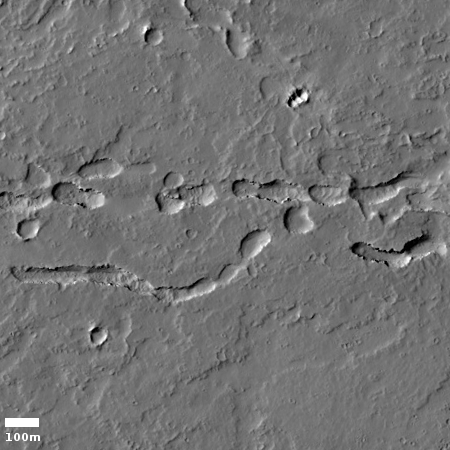 Time for more strange Martian geology! As I said in my post yesterday of a cool image of skylights into what might be a Martian lava tube, this is lava week on Behind the Black. The image at the right, rotated, reduced, and cropped to post here, is similar to yesterday’s photograph, showing a line of sinks and depressions that strongly suggest the existence of an underground lava tube.

The problem with this theory is that at present we really have no idea what flowed here. It could have been lava, but it also could have been mud, water, ice, or some as yet unimagined Martian geological process.

The image was part of the most recent image release from the high resolution camera on Mars Reconnaissance Orbiter (MRO), and was uncaptioned. The top image shows the whole channel as captured by the photograph, with the white box indicating the area covered by the second image, posted here at full resolution.

Though the overall slope of the terrain here is downhill to the west, the grade is relatively shallow, so there is no guarantee that the local slope of this particular channel follows that trend. Downhill could be either to the west or the east.

The reason I favor lava (as an amateur geologist) is the location of this channel, as shown in the overview map below and to the right. 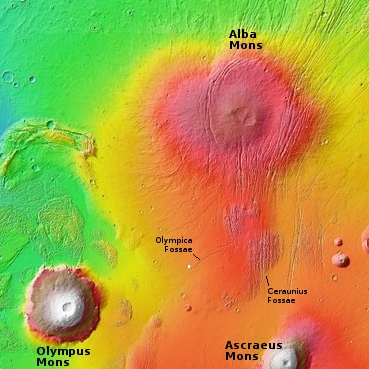 The white box just to the west of Olympica Fossae (which is itself a large series of parallel channels whose origin is also as mysterious.) indicates the image’s location. Nestled between three giant Martian volcanoes, one cannot help but consider the likelihood that volcanic activity contributed to this line of sinks.

In science however it is very dangerous to rely on first impressions. A lot of time and geology has occurred here, within a climate, gravity, and overall chemistry that is quite different than Earth’s. Moreover, the thermal heat of volcanic activity can often cause many other geological processes (such as the abrupt melting of ice) that does not involve the flow of lava.

Regardless, the line of sinks here still suggests the existence of an underground passage. That passage might still be there, or it could now be filled by the subsidence of material from above. And that substance could even be ice, though at this point this is no direct evidence to prove this.

Tomorrow we move east to the fissures of Ceraunius Fossae.