Today’s cool image from Mars highlights what is probably the biggest geological conundrum the red planet presents for planetary scientists. The photo to the right, rotated, cropped, and reduced to post here, was taken on February 1, 2021 by the high resolution camera on Mars Reconnaissance Orbiter (MRO). Though I have cropped it, I have cropped out very little, because the entire meandering drainage valley is its most interesting feature, and that takes up almost the entire image.

The photo was simply labeled by the camera team a “terrain sample northwest of Sytinskaya Crater”, so I suspect this was taken not in connection with any specific research but because they must use the camera at a regular intervals to maintain its temperature, and when they have gaps in their schedule they try to pick spots of interest in areas that have not had many high resolution photos taken. In this case however I suspect the location choice was very far from random, as they clearly wanted to capture this drainage system, in its entirety.

I called this merely a drainage channel without indicating what caused the channel, be it liquid water, ice, or wind, because in this case that is a main question. At first glance an Earthman will immediately suspect water, which is what scientists supposed for the last half century. The problem with that conclusion is that the Martian atmosphere is too cold and thin for liquid water to exist on its surface, and though there seems to be plenty of evidence that liquid water once existed there, no scientist has yet come up with a completely accepted climate model that allows for such conditions in anytime in Mars’ past.

The rover Opportunity found that some channels it explored might have been carved by wind, though to our human eyes it seems unlikely that a meandering tributary system such as this could have been carved by wind. The possibility however must not be dismissed out of hand, since Mars is an alien planet and alien things (to Earth) happen there. 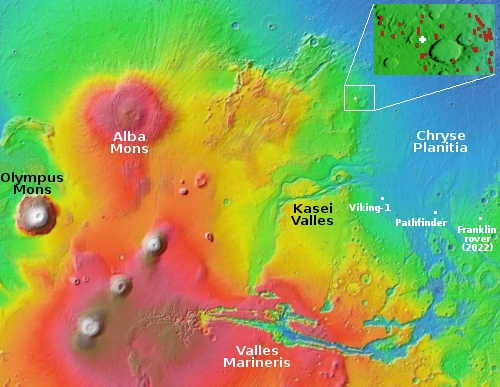 On this map the white cross indicates this photo’s location. The map inset comes from the archive of MRO, and shows all the pictures in red that the high resolution camera has taken in this area. The large crater to the southeast is 58-mile-wide Sytinskaya Crter

At 43 degrees latitude glacial ice flows could certainly have carved this channel, based on data that shows ample such glacial features across the entire planet in the 30 to 60 degree latitude bands. However, there do not seem to be many glacial feature in this picture (though there are some small features in the channel that hint at glacial flows).

If you go to the MRO archive for this location, choose the arrow icon at the top, and then click on any red box, you will find that almost all the images show similar channels, all of which seem to be flowing down to the north and east into the northern lowland plain of Chryse Planitia. Moreover, this location is north of Kasei Valles, which evidence strongly suggests was carved by catastrophic floods on a Mars that was once wet and warm.

Thus, water seems the most likely cause for carving this channel.

And yet, this is the conundrum. Here we have a meandering channel that to our eyes should be caused by flowing water. Yet scientists can’t yet model a Mars climate in its past that would have allowed such a thing. And if ice did it, why is there relatively little obvious evidence of buried glacial flows here, even though it is smack dab in the middle of the latitude bands where such things are found in large numbers?

There’s the mystery. I leave it to future generations of planetary scientists, hopefully many living on Mars itself, to solve it.