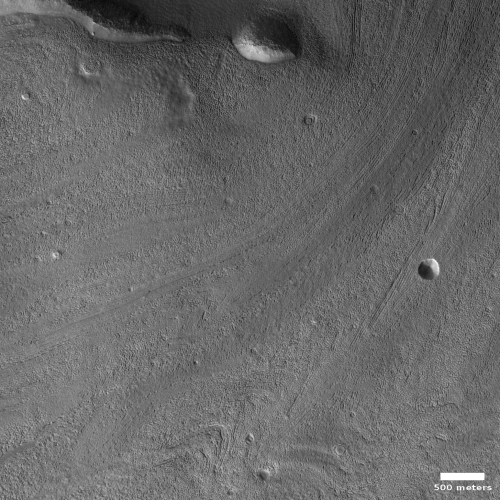 The photo to the right, rotated, cropped, and reduced to post here, was taken on September 9, 2020 by the high resolution camera on Mars Reconnaissance Orbiter (MRO). It shows the northern half of a 15-mile wide canyon on Mars whose floor appears to be completely filled by a glacier. The full picture shows both the north and south rims, and captures the canyon’s outlet from the southern cratered highlands into the chaotic terrain of Deuteronilus Mensae, the region of Mars I like to call glacier country. This region of canyons and mesas forms the transition zone down to the northern lowland plains, and is a region where almost every MRO image shows glacial-type features.

The size and age of this glacial feature is what makes it stand out. First, note the craters on its surface. The glacier has to be quite old and inactive for a long time for those craters to still exist as they appear. Any movement would have distorted them, and they show little distortion.

The overview map below gives a sense of this glacier’s size. 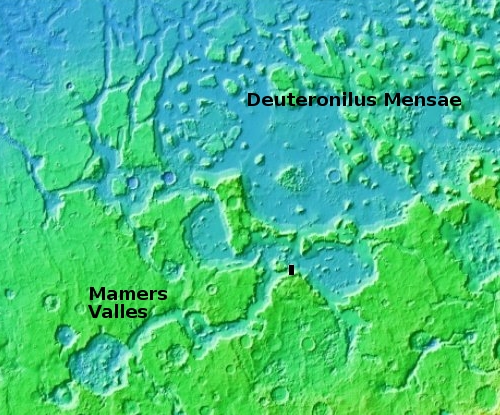 The black rectangle shows the area covered by the full image. Mamers Valles is a 300 mile long canyon that drains into Deuteronilus Mensae at this point. Today’s full image covers the full width of its eastern outlet, showing that this glacier fills the canyon. Other MRO images further up the canyon to the west (here and here) show the same thing, even though to the west Mamers Valles widens considerably. Yet, it is still filled with this glacier-like flow. (See also this earlier post on Mamers Valles.)

There is a lot of buried ice here, and it has been here for a long time. Such data has suggested to scientists the possibility that many of Mars’s meandering river-like canyons like Mamers might not have been formed by fast-flowing liquid water, but by slowly flowing glacial ice. We do not know this yet, and there has only been a few studies pointing in this direction. Still, the evidence is enticing, and if true could help explain the biggest geological mystery of Mars. It shows a lot of surface features and geology that suggests the past existence of liquid water. Yet its thin atmosphere and cold temperature make flowing liquid water impossible. And no model has yet convincingly created the right climate conditions in the Martian past to have made liquid water possible.