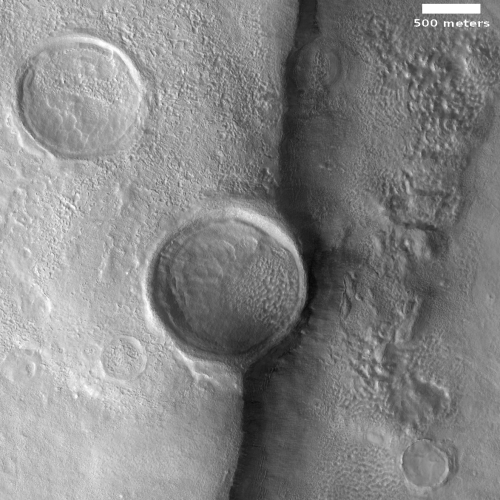 Cool image time! The image to the right, cropped and reduced to post here, was taken by Mars Reconnaissance Orbiter (MRO) on May 1, 2020, and shows a truly intriguing crater that they dub a “Crater Hanging on Mesa Wall.”

Located in Deuteronilus Mensae, a chaos region of mesas and cross-crossing canyons in the transition zone between the northern lowland plains and the southern cratered highlands, the crater literally overhangs the edge of this canyon’s cliff. The overview map to the right, with this location indicated by the red box, illustrates what this region’s geology is like.

The most likely explanation is that the impact occurred prior to the creation of the canyon, and when the canyon eroded, the material in and of this crater was more resistant, probably because the impact had packed it together to increase its density.

At the same time, the features inside both craters in the photo, as well as below them on the floor of the canyon, suggest the presence of buried glaciers, something not unlikely at the 45 degree north latitude where this crater sits.

So, here’s a guess at the geological history. First we had the impact, then during the eons of glacial ebb and flow on Mars due to wide swings in the planet’s obliquity (its rotational tilt), the canyon was cut, with that erosion leaving the crater sitting high above the canyon floor below it.

One more curious detail: The material in the canyon seems asymmetric, suggesting that the crater actually dips down toward the canyon, as if it as a unit has tilted to the east as the canyon was worn out below it.