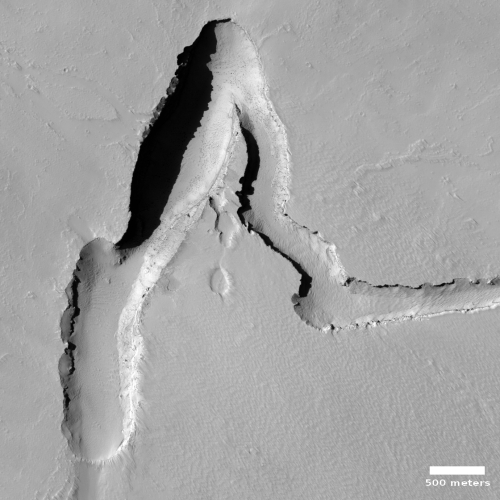 Today’s cool image from Mars takes us to the southern flank of the giant volcano Pavonis Mons. The photo to the right, rotated, cropped, and reduced to post here, shows what appears to be a volcanic vent from more than a billion years ago when it is believed Pavonis was actively erupting. The picture was taken on March 2, 2021 by the high resolution camera on Mars Reconnaissance Orbiter (MRO). The grade is mostly downhill to the east and south east.

It is very possible that this is the resurgence of a lava tube, the point where the underground flow either emerged to the surface or got so close to the surface that the ceiling was thin enough to later collapse, creating this depression. No pits or skylights are visible in this high resolution picture, however, so whether there is an underground lava tube here is not known, an unknown that is amplified by the wider MRO context camera image below. 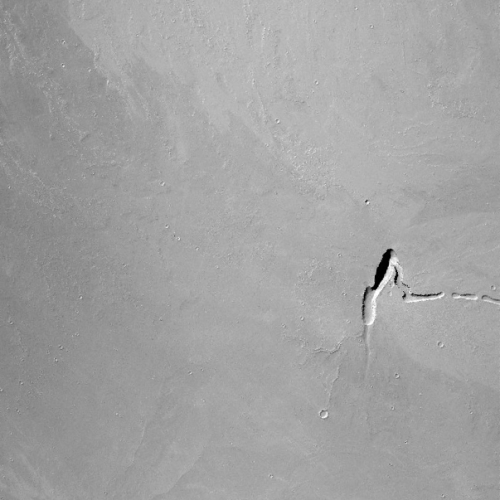 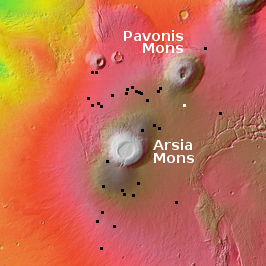 This vent is the only truly distinct feature for miles around. The lack of craters indicates that this terrain is a relatively young lava plain. So does its relatively smoothness, which is even more striking if you look at the full context camera image. Other than a handful of other small vent depressions (all of which appear to be on the top of indistinct mounds), the surrounding countryside is practically featureless. Once, long ago in the past this was a sheet of slowly flowing molten lava that froze smoothly like ice.

The smooth terrain also shows no evidence of an underground lava tube uphill from the vent. Downhill the string of depressions suggests there is a tube below ground, but with no evident skylight into that void. The adjacent context camera image to the east shows a similar smooth terrain, with this string of depressions slowly fading away as if the tube was overwhelmed by the larger flow around it.

The overview map to the right shows this vent’s location by the white dot. The black dots indicate all the pits so far photographed by MRO’s high resolution camera that I have previously featured on Behind the Black.

Understanding the volcanic lava processes that took place when these volcanoes were active is going to take many decades of research, much of it required on the Martian surface. The lower Martian gravity changed things in ways that while resembling volcanic processes on Earth, also included some fundamental differences that are hard to decipher from orbital images.