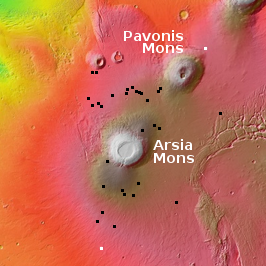 Regular readers of Behind the Black know that since 2018 I have regularly documented all the images of pits taken by the high resolution camera on Mars Reconnaissance Orbiter (MRO). (See my last pit post in January for a full list of these previous articles.) The black dots on the map to the right shows the location of all the pits near the volcanoes Arsia and Pavonis Mons that have so far been highlighted here.

The two white dots are the two most recent MRO pits, and are the subject of today’s cool image. They also happen to be the farthest north and south pits so far documented. The southernmost pit, which I am saving till last, is the most interesting. 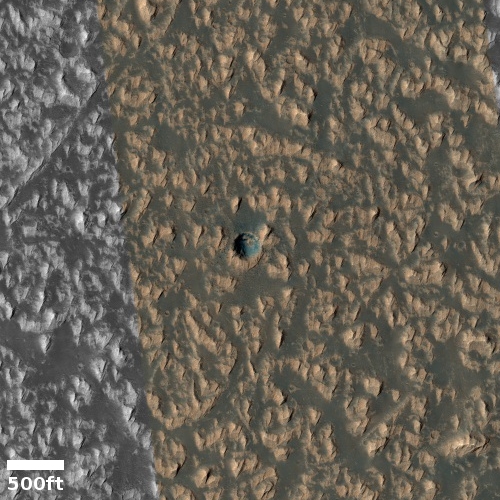 The first pit to the right, the image cropped to post here, was taken on January 5, 2021. It is located to the northeast of Pavonis Mons, and is similar to most of these likely skylights into an underground lava tube. When compared to the nearby similarly-sized impact crater to the east, the differences are obvious. The pit’s edges are sharp, with no rim as you’d see with a crater. It is also much deeper than a crater, with the strong suggestion that the pit’s edges are overhung. While we cannot see for sure whether there are any underlying passages leading off from this pit, there is a faint hint on the surface of a northwest-to-southwest depression under this pit, suggesting the lava tube itself.

The second pit to the right, also cropped to post here, was taken on January 7, 2021, and is the farthest south pit yet documented in this volcanic region. Unlike the first pit above, it appears not as deep, and with less apparent overhang at its edges.

What makes this pit really interesting however are two features. First, there is the bluish color at the pit’s bottom. A bright blue, according to guidance [pdf] from the camera’s science team suggest either coarse rocks or frost or ice. As the pit is in the dry equatorial regions at 20 degrees south latitude, with the picture taken during summer, it is unlikely this is ice. More likely the blue color indicates the breakdown material that fell when the roof collapsed.

The possibility of ice, however is very tantalizing. Other research has found evidence of past glaciers on the western slopes of Arsia Mons, suggesting that ice might still exist in these lava tubes.

Second, there is the surrounding terrain, which is an endless scattering of small pointed knobs and ridges surrounded by dust-covered smooth hollows. The lack of craters suggests it is a relatively young lava plain. The knobs and ridges suggest to me that for some reason it has been eroded over time. A quick review of all the other high resolution images of nearby pits suggests that as you descend the southern flank of Arsia Mons, the terrain gets rougher and rougher, suggesting the lower flanks are older. This is a pure guess on my part, but does make some sense, as the flows from newer eruptions should be higher up the mountain.

Both of these pits were documented in a 2015 study that used the context camera on MRO and found more than a hundred in this region. Since then the scientists have been methodically snapping high resolution pictures of these pits. As Chris Okubo of the U.S. Geological Survey explained to me in 2019,

We are just cataloging them in the hopes that someday one of us, or someone else will have the time to investigate these further.

I will in turn continue to catalog them here, with the hope that this might encourage someone to do exactly that.