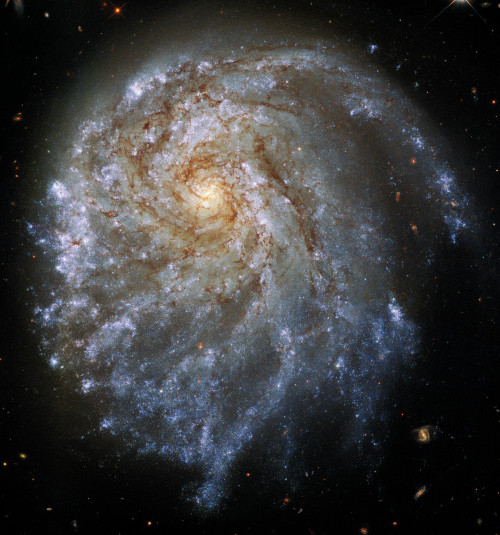 For a change, today’s cool image is not from Mars, but instead goes deep into space. The photo to the right, reduced to post here, was taken by the Hubble Space Telescope of the relatively nearby spiral galaxy NGC 2276, located about 120 million light years away. As the caption explains:

The magnificent spiral galaxy NGC 2276 looks a bit lopsided in this Hubble Space Telescope snapshot. A bright hub of older yellowish stars normally lies directly in the center of most spiral galaxies. But the bulge in NGC 2276 looks offset to the upper left.

In reality, a neighboring galaxy to the right of NGC 2276 (NGC 2300, not seen here) is gravitationally tugging on its disk of blue stars, pulling the stars on one side of the galaxy outward to distort the galaxy’s normal fried-egg appearance. This sort of “tug-of-war” between galaxies that pass close enough to feel each other’s gravitational pull is not uncommon in the universe. But, like snowflakes, no two close encounters look exactly alike.

The scientists also note that the bright edge along the galaxy’s north and west perimeter mark regions of intense star-formation. In those same regions astronomers six years ago identified the first medium-sized black hole ever found.