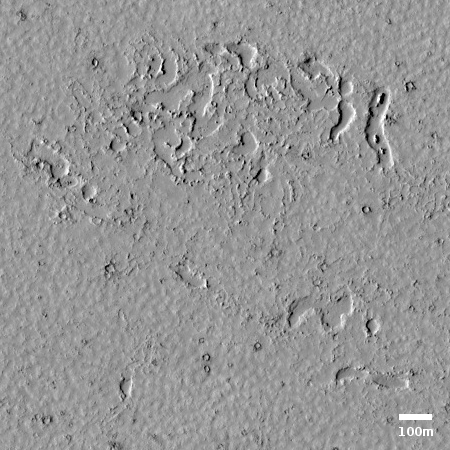 Cool image time! The photo to the right, cropped to post here, was taken by the high resolution camera on Mars Reconnaissance Orbiter (MRO) on March 2, 2020, and shows some inexplicable shallow pits and depressions in the middle of a relatively flat and featureless plain.

Make sure you click on the image to see the full photo. Though the plain looks remarkably smooth, a handful of dark splotches are scattered about, almost all of which occur on top of small craters.

What causes these depressions? The MRO team calls this “Landforms near Cerberus Tholi.” Cereberus Tholi is a a collection of several indistinct and relatively small humps that scientists think might be shield volcanoes.

The location of this image is indicated by the white cross in the overview map on the right. As you can see, it is located in the middle of Mars’s volcano country, with the giant volcanoes Elysium Mons to the north and Olympus Mons to the east. To the south is the vast volcanic ash deposit dubbed Medusae Fossae, covering a region about as big as India. Just to the west is the edge of the what some scientists propose is the youngest lava field on Mars [pdf], dubbed the Athabasca Valles flood lava. 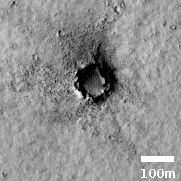 Furthermore, the darkened craters also suggest the existence of volcanic vents. To the right is the largest crater, about as wide as a football field. The dark material that the prevailing winds seem to be scattering to the west could be ash deposits. It could also be material from below ground, released at a volcanic vent.

All this superficial data suggest that we are looking at a volcanic flood plain, now extinct but once very active, as were all the volcanic features in this part of Mars. Data suggests the age of the Cereberus Tholi shields to be about 600 million years old, though the Athabasca Valles flood plain is thought to be much younger, between 500,000 to 10 million years old.

So what caused the depressions. The pdf paper about the Athabasca Valles lava flood plain gives one clue:

The lava is exceedingly thin in proximal Athabasca Valles and gradually thickens in the downstream direction, transitioning from a material unit that drapes the substrate topography to one that submerges it near the terminus of the channel system. The most straightforward interpretation of these observations is that a fissure eruption at the head of Athabasca Valles flooded the down-slope terrain with lava, and then, as the eruption waned,
the lava receded from the channels and drained downstream into Cerberus Palus where it ponded.

This model is concordant with all of the available data, including the superposition and crosscutting relationships seen in the rootless cones (pseudocraters) that pepper the floor of Athabasca Valles. Thus, the flood lava that now occupies Athabasca Valles deflated, rather than inflated, in its proximal reaches before solidifying.

If I understand this interpretation correctly, this lava field, just on the outer edge of the Athabasca Valles flood plain, was thick enough to cover all of the underlying topography. As it solidified it “deflated”, producing the crater vents we see, similar to the convection bubbles you sees when you simmer tomato sauce. During that deflation the random depressions could have also formed, vaguely reflecting the underlying topography.

This interpretation could be very wrong. For example, this image is on the edge of Athabasca Valles, but it might not be part of it, which means the theory above would not apply to it.

Despite these uncertainties, it does appear that we are looking at a type of volcanic feature, produced millions of years ago and sitting relatively unchanged since then.