A shadowed ice patch on Mars

May 19, 2020 Robert Zimmerman Points of Information 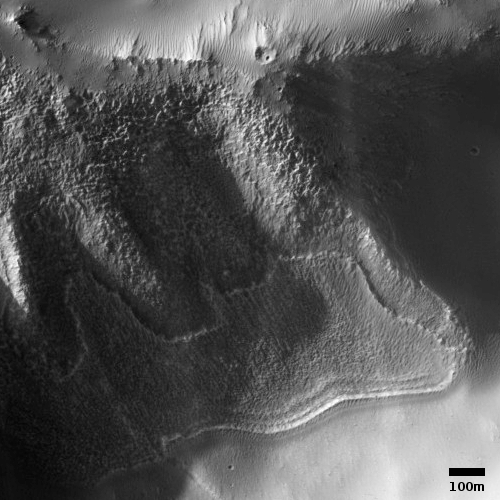 Cool image time! The evidence coming back from Mars in the past two decades has increasingly suggested that there is a lot of water in that planet’s mid- and high latitudes. In the mid-latitudes the evidence suggests that ice is locked in a lot of buried and inactive glaciers that were laid down during periods when the planet’s rotational tilt, its obliquity, was greater so that the annual seasons were more extreme. During those times the mid-latitudes were colder than the poles, and water was being transferred from the poles to those mid-latitudes.

The image to the right appears to be more such evidence. Taken on March 21, 2020 by the high resolution camera on Mars Reconnaissance Orbiter (MRO) and cropped and brightened by me to bring out the important details, it shows what looks to be a distinct patch of ice on the south-facing slope of the rim of a large crater. Since this crater is in the southern mid-latitudes (34 degrees south), that south-facing slope generally gets much less sunlight, even in the summer, so any remaining buried glacial ice on that slope will linger for a longer period.

Think of the lingering ice and snow patches on shadowed locations on Earth. Because the Sun does not directly shine on them, they will be the last patches to melt away.

What I think is likely important about this patch are the exposed layers along its edge. These are the spots that are melting first, as they are where the ice is exposed, unprotected by a layer of dust and debris. It is also here that we have a window into that geological history. Even at this resolution you can see that the ice was laid down in layers, meaning that it contains evidence of those repeated climate cycles produced by Mars’ shifts in obliquity.

Those layers even seem to show the same sharp and sudden change from brighter and dirtier layers, as seen in the layers of the north pole ice cap, that occurred about 4.5 million years ago.

How tantalizing. The entire climate history of Mars is sitting there for us to decipher. We need only drill a few core samples and voila! the pieces of that history will start to fall into place.