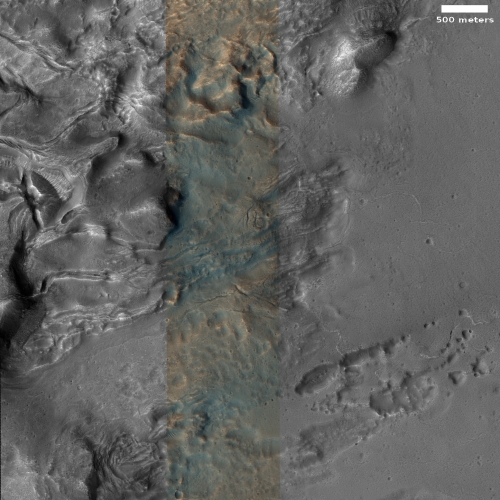 Cool image time! The Cydonia region on Mars, located at around 30-40 degrees north latitude in the northern lowland plains just beyond the transition zone up to the southern cratered highlands, is well known to many on Earth because it was here that the Viking-1 orbiter took a picture of a mesa that, because of the sun angle, made its shadows resemble a face. Thus was born the “Face on Mars” that consumed the shallow-minded among us — and thus the culture, media, and Hollywood — absurdly for decades, until Mars Global Surveyor took the first high resolution image and proved without doubt what was really obvious from the beginning, that it was nothing more than a mesa.

Cydonia however remains a very intriguing region of Mars, mostly because it is home to a lot of strange geology, as shown by the photo to the right, rotated, cropped, and reduced to post here. Taken on January 16, 2021 by the high resolution camera on Mars Reconnaissance Orbiter (MRO), it shows some of that strange and inexplicable geology.

While Cydonia is inside that 30-60 degree latitude band where MRO has imaged numerous glacial-type features, I do not know if many such features have been found there. Except for the pits and depressions in the photo’s lower right — which suggest decay in an ice sheet — little else at first glance in the picture clearly invokes any of the obvious glacial features one comes to expect. There appear to be what might be lobate flows in the image’s center going from the west to the east, but if they are glacial, they are so decayed to as leave much doubt.

The overview image below shows where Cydonia is on Mars, and helps explain partly what is found here. 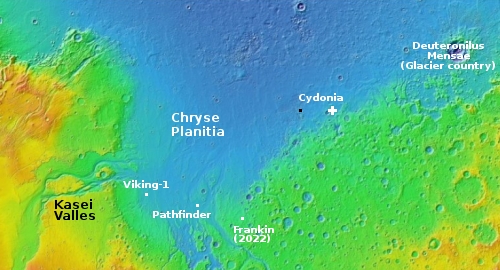 Cydonia sits mostly in the northern lowlands. Though the region has many knobs and mesas that resemble the chaos terrain like the glacier country in Deuteronilus Mensae to the east, much of its chaos appears to be in its final stages of erosion, so that it is more a plain of small knobs and mesas than a region of cross-cutting canyons with large mesas in-between. Thus if there is buried ice here, rather than finding it in glaciers flowing off mesas it is more probably locked in underground ice sheets, as suggested in the lower right of today’s cool image.

In fact, the wider view provided by MRO’s context camera of this same place, rotated, cropped and reduced and posted below, makes its ice-filled geology more evident, though still far from certain. The craters in the wide view seem filled with some debris, and in numerous spots across the entire terrain there appear what to my eye look like corroding glaciers.

This is all a guess on my part, based on what I now know of Mars’ geology and how driven it appears to be by latitude. The white box below marks the location of the close-up image above. 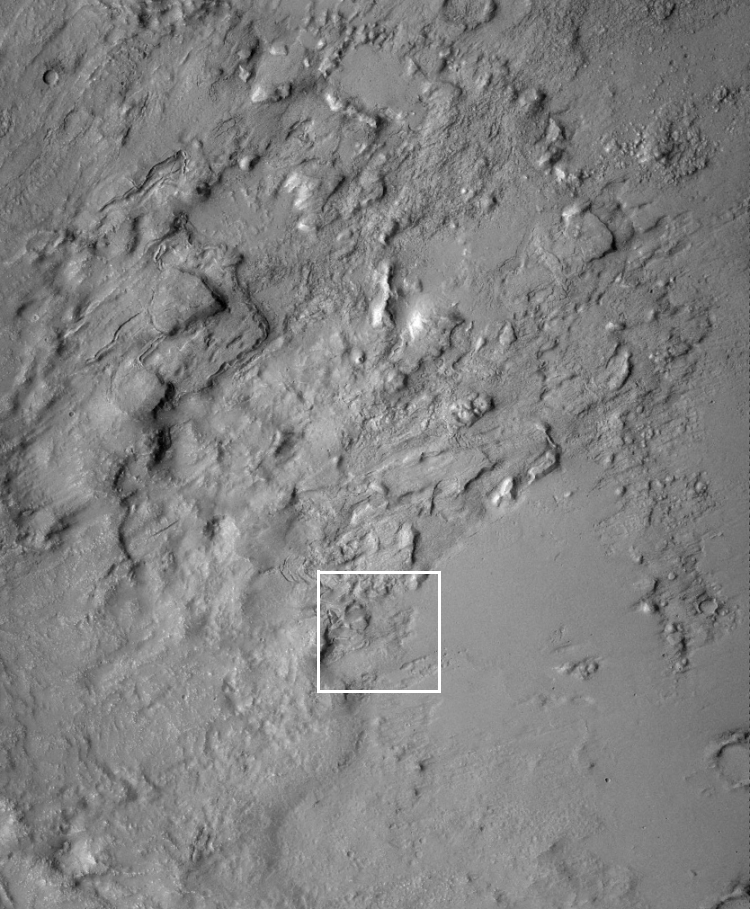