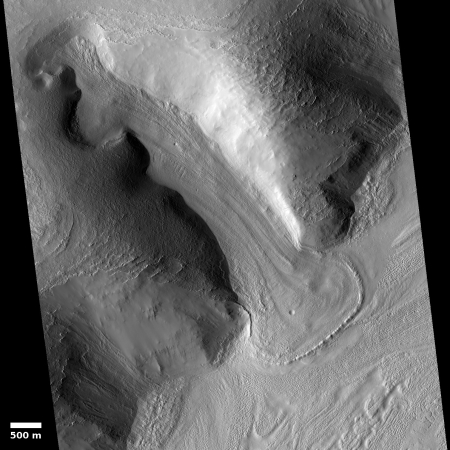 The science team for the high resolution camera on Mars Reconnaissance Orbiter (MRO) today posted a nice lesson on what features to look for when you are trying to find glaciers on Mars.

To do this they used one of the earliest images of a Martian glacier, taken by MRO on June 12, 2008. The image to the right, cropped and reduced to post here, shows that entire glacier, coming off a mesa in the chaos terrain region of Protonilus Mensae, a region of mesas and glaciers that I highlighted in an earlier post in December, showing images of a mesa that had numerous glaciers flowing down from all sides.

The overview map to the right shows the location of both that earlier glacier-surrounded mesa (the red dot in Protonilus Mensae) and today’s image (the blue dot).

What the MRO science team has done with the image today however is to use it to illustrate the most important geological features that one will see when looking at a Martian glacier.

One annotated section of the above image points out the foot of the glacier and moraine of material that the glacier had pushed out in front of it as it flowed. A second section focuses on the “linear features resembling fractures, as seen on many terrestrial glaciers,” which also resemble the parallel ridges and grooves that had been highlighted in an earlier MRO image posted only last week.

A third section notes the parallel lines visible along the glaciers edge near the valley walls. As they observe, these layers “could potentially be exposed layers or lines that mark the [glaciers]’s past levels.”

Finally, a fourth section shows the flowing flow features in the plains just beyond the moraine (only partly visible in my cropped image above). These are common near glaciers on Mars, and represent evidence of a time period when the glacier was active, with the ice pushing its way into the flats below the mesa.

This glacier however is likely not active today. Instead it still exists because it is buried by a veneer of dust and debris, that insulates it from the Sun and prevents it from sublimating away. It is probably more than a million years since this glacier moved, during the last time when Mars’ inclination was more than about 30 degrees and as great as 60 degrees. That higher inclination made the poles warmer than the mid-latitudes, thus transferring water from those poles to the mid-latitudes to fall as snow on these glaciers.

Today, with the planet’s inclination at 25 degrees, it is believed (but not proven) that the glaciers and poles of Mars are in a steady state. Some evidence suggests however that any the mid-latitude glaciers exposed to the Sun are shrinking, indicating that the process is reversing, and the ice at the mid-latitudes is beginning to sublimate back to the poles.