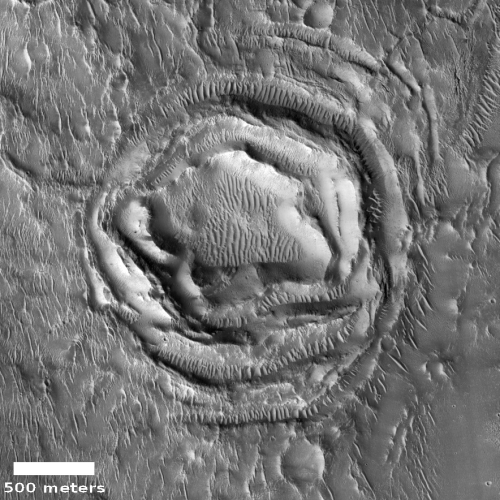 Today’s cool image, taken on September 2, 2020 by the high resolution camera on Mars Reconnaissance Orbiter (MRO) and cropped and reduced to post here, is one that I will make very little attempt to explain. It falls into a category I call “What the heck?!” The uncaptioned website labels this “Ringed Ridges in Kasei Valles”, which merely describes what we see.

This isn’t an impact crater. The rings don’t fit any morphology I’ve ever seen for such features.

Could we be looking at some type of glacial feature? The latitude, 29 degrees north, makes this unlikely but possible. Even so, it sure doesn’t look like it. The ripples in the center and between the ridges are sand dunes, not glacial features.

Might this be a volcanic vent, with the concentric ridges marking multiple eruptions? Maybe, but if so I’ve never seen any volcanic vent or caldera that looked quite like this.

The overview map below gives some context, but hardly explains anything. 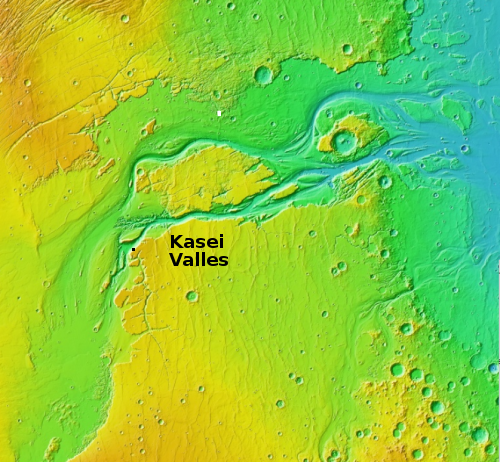 The white box north of the main channels of Kasei Valles marks the location of this strange feature.

The one major driving geological process that is thought to have shaped the Kasei Valley is that of one or more catastrophic floods, over many millions of years. One hypothesis [pdf] even suggests a large ice dam had formed across the canyon just before it turns east, creating a large lake that when the dam broke rushed eastward, creating the canyon’s braided channels.

Unfortunately, I can’t reconcile such floods with the strange concentric ridges above. The rings just don’t seem to have been formed or even reshaped by a catastrophic flood.

So what made this? While I suppose volcanism is the best guess, it is not one I have much enthusiasm for. My readers are welcome to make their own guesses, but I guarantee we will all be likely wrong in some manner.