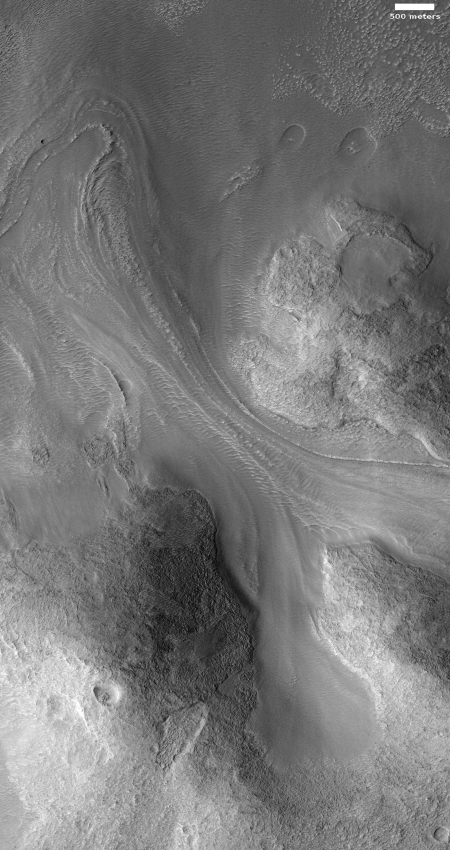 Cool image time! Planetary geologists now think that the mid-latitudes of Mars contain many buried and inactive glaciers, formed several million years ago when the planet’s inclination was more than 50 degrees [pdf], rather than the 25 degrees it is now. At that time the mid-latitudes were actually colder than the poles, and water would sublimate from the poles to the colder mid-latitudes to pile up as snow and glaciers.

With today’s 25 degree inclination those mid-latitude glaciers are inactive, and have been so for several million years. It might even be that Mars’ water is beginning a shift back to the poles, but this is uncertain. If anything the planet is presently in a balance, and won’t start transferring water back to the poles until its inclination drops closer to zero.

The image to the right, taken by the high resolution camera on Mars Reconnaissance Orbiter (MRO) on September 23, 2019, is of one of those glacial flows, coming off a mesa in a region called Protonilus Mensae, located in the transition zone between the southern highlands and the northern lowland plains where an intermittent ocean might have once existed.

Much of the geology of Protonilus Mensae is chaos terrain, places where the surface has eroded along angled fissures to form many mesas. The overview map below focuses in on the particular mesa where this flow is located. The red boxes indicate all the MRO images taken of this mesa, with the image above indicated by the black dot. 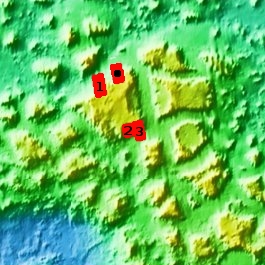 You can see the chaos nature of this region by the many mesas, all separated by wide generally straight canyons. The blue area on the lower left is a large impact crater, its floor at a lower elevation.

The evidence that this area has many inactive glaciers is strongly reinforced when you look at the other three images taken of the slopes of this mesa, labeled #1, #2, and #3 on the overview map. Another image recently taken by MRO of another glacier in Protonilus Mensae to the east also supports this hypothesis. All these geological features resemble Earth glaciers, flows coming down canyons or hollows. All show evidence of a moraine at their feet, with the first image above even showing the merger of two glaciers at a confluence, similar the Concordia confluence of two glaciers in the Karakoram Mountains of Pakistan, near the world’s second highest mountain, K2.

A wider view of Mars gives further context. The map to the right shows the location of this mesa by the red dot in Protonilus Mesae. As already noted, this region is in that transition zone that might have once even been a shoreline to the ocean to the north.

The map also shows where Opportunity landed, as well as the planned landing sites for the European ExoMars 2020 rover and the U.S.’s Mars2020 rover, both scheduled for launch this coming summer.

The landing site for Mars2020 has many features strongly resembling the glaciers seen at this mesa at Protonilus Mensae, with the giant delta flowing into Jezero Crater especially intriguing. It might be a buried glacier, or cemented mud from water flow. The latter is more likely, as the latitude of this crater is around 18 degrees, putting it a bit south of the 30 to 60 degree latitudes where the buried glaciers have generally been found.

Regardless, the rover will see some breath-taking sites. And if it does find buried glaciers, all to the better. It will prove that these glaciers exist, and that water can be found in ample accessible places across the mid-latitudes of Mars.