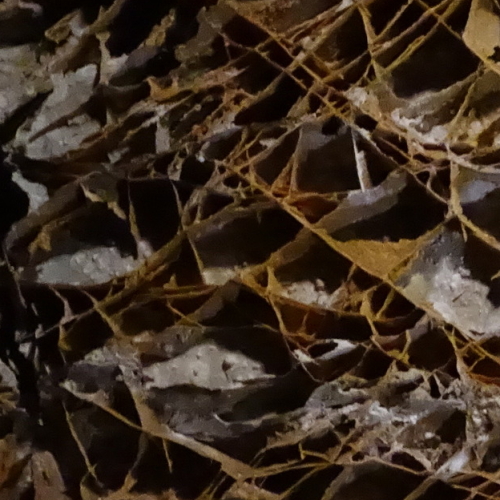 Anyone who has ever visited either Wind or Jewel caves in South Dakota has likely seen some wonderful examples of the cave formation boxwork, formed when the material in cracks is more resistant to erosion that the surrounding bedrock, which once eroded away leaves behind the criss-crossing ridges seen in the picture to the right.

Today’s cool image provides us what appears to be an example of boxwork on Mars. However, unlike on Earth it is not in a cave but on the surface. It is also much larger. Instead of the ridges being almost paper thin and stretching for inches or feet, this Martian boxwork is feet wide with ridges extending hundreds of feet in size, as shown by today’s cool image below. 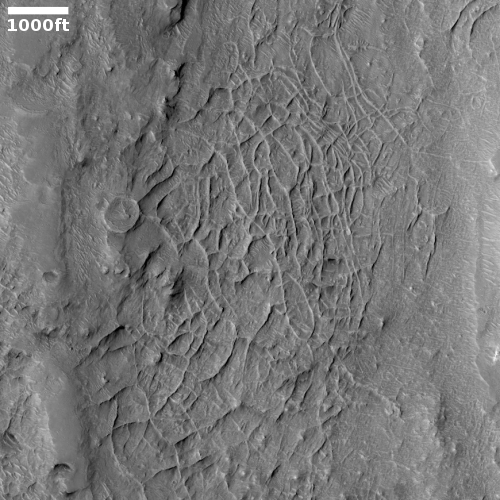 The image to the right, cropped and reduced to post here, was taken by the high resolution camera on Mars Reconnaissance Orbiter (MRO) on February 4, 2021. It shows what the scientists have labeled “polygonal ridges” on the floor of 90-mile wide Robert Sharp Crater, located directly to the west of Gale Crater near the Martian equator in the transition zone between the northern lowland plains and the southern cratered highlands.

Requested by Jeremy Brossier of Wesleyan University, I emailed him to ask him for more information, and he immediately sent me a copy of a 2020 paper that he co-wrote describing the entire known geology of Sharp Crater. From the paper’s section describing these polygonal ridges:

In other words, their formation is similar in basic principles to the boxwork found in caves on Earth. The material cemented into the cracks remains when the softer surrounding bedrock erodes away. 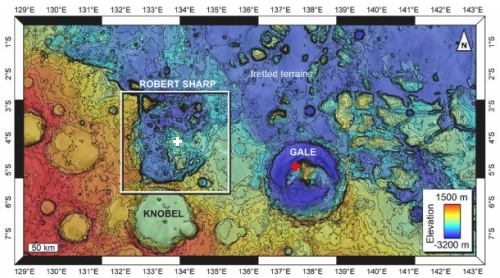 The overview map to the right, figure 2 in Brossier’s paper, shows the location of this photo by the white cross, with the red cross indicating where Curiosity is presently roving in Gale Crater. The fretted terrain is also called chaos terrain, and is found abundantly in the transition zone bordering the northern lowlands. At higher latitudes it is home to many glaciers. Here, at the equator, there is little or no evidence of glaciers, though they might have existed in the past.

What the scientists believe is that both Sharp and Gale were shaped by a variety of geological processes involving water, including flowing water or ice as well as lakes. The history of the two craters were somewhat different, since the northern rim of Robert Sharp Crater has been breached and the crater is far more eroded. That very complicated history is thought to have begun billions of years ago. After impact the crater was eroded, than its interior filled, than eroded, and then filled again (likely with wind-blown volcanic ash). About an estimated 3 billion years ago there was also a lake here, which when it disappeared left behind deltas and channels.

The surface boxwork is thought to have formed in conjunction with the water that formed the lake, though the details remain very vague and will require a lot more information in order to determine those details with any confidence.

It was a desire to obtain that additional information that prompted Brossier to request this image. As he explained in his email, “I studied the Robert Sharp crater to highlight the past aqueous phases that existed therein. While doing this, I found a lot of these polygonal ridges (or boxworks). So, I decided to request high resolution images.”