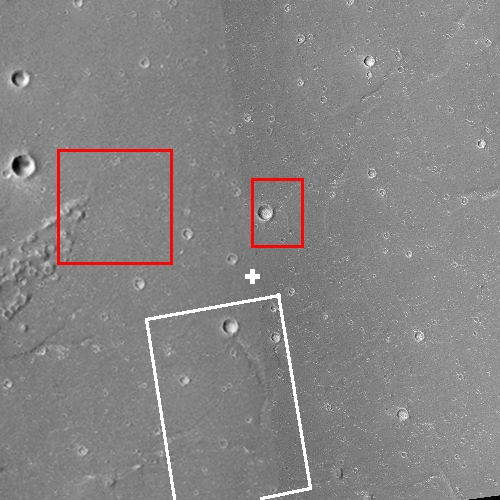 The new colonial movement: China yesterday released the first two images taken by its Mars orbiter Tianwen-1 of its planned rover landing site in the northern lowland plains of Mars.

The image to the right is a mosaic of two wide angle photos from the context camera on Mars Reconnaissance Orbiter (MRO). The white cross is the spot of the latitude and longitude that had previously been leaked to the Chinese press as the landing site. The white box shows the area covered by the only high resolution MRO photo, as of October 2020. Since then MRO has taken a number of additional high resolution images of this area.

The red boxes mark the areas covered by Tianwen-1’s two new images. Below is a reduced version of the larger of these two photos. 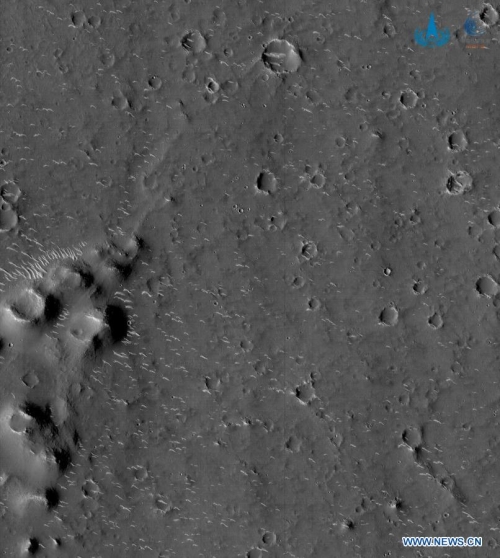 These two images confirm that this location was the rover’s prime landing site. However, the release of the images also included the announcement that they have pushed back the rover landing from late April to May or even June. Either they have decided it is going to take more time to cover this area with reconnaissance photos, or these first photos have forced them to reconsider the landing site.

That these two photos keyed in on the two largest features in this area suggests they are assessing the landing site. We do not know how much smooth territory the lander needs to settle down between these large features. Nor do we know the exact technology the lander will use to maneuver its way down. It could be it will use these images as reference, which means they must collect enough images to cover the entire area before landing.

Or it could be these images have told them this location won’t work and thus the delay in landing.

I think the answer is the former. However, we will have to wait to find out. China’s government is not going to be forthcoming with many details.