Cool image time! The photo to the right, rotated and cropped to post here and taken on January 15, 2021 by the high resolution camera on Mars Reconnaissance Orbiter (MRO), shows the colorful top of a small mesa in the northern lowland plains of Mars and about 300 miles north of the planned landing zone for Europe’s Franklin rover, scheduled to launch in 2022.

What makes this mesa stand out is the bright and colorful areas on its slopes. The colors are false, but they indicate [pdf] certain things. The yellow is likely dust covered rock. The pinkish rock is also likely dust-covered, but made up of coarser material. The bluish strip running along the mesa’s northern slope is possibly frost or ice, not unlikely as this mound is at 25 degrees north latitude and was taken during winter. The slope faces north, which would put it in shadow much of the time during winter.

The colors however only hint at what is there. 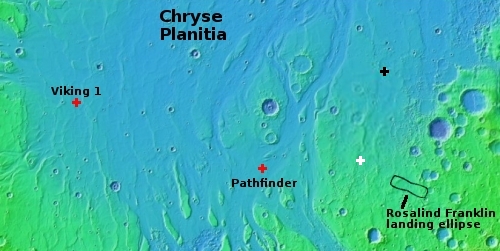 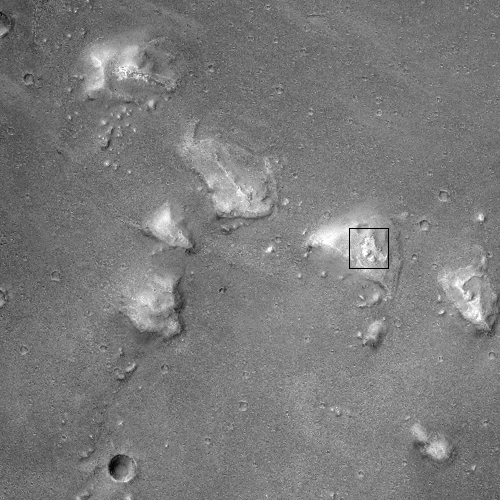 The location of today’s image is indicated by the black cross on the overview map to the right. An earlier captioned image of a similar mound to the south of this one, marked by the white cross, noted the same diversity of colors that suggest the existence of “diverse mineral compositions.”

Nor are these mesas unique. The wider view of this same area by MRO’s context camera to the right shows that there are numerous such bright mesas in this region. The black square marks the area covered by the first photo above.

The geological process that formed these mounds is at present not clearly understood. They could be made of material that is more resistant to erosion. Or maybe we are merely seeing the peaks of older larger mountains that over time became buried by ice and dust and debris.

Or maybe neither of these explanations is right. We just don’t have enough information.