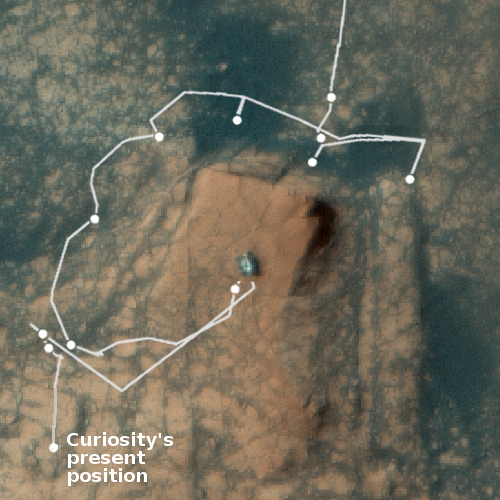 Today’s cool image, to the right and cropped to post here, was taken on April 18, 2021 by the high resolution camera on Mars Reconnaissance Orbiter (MRO). Released today by MRO’s science team, it shows the rover Curiosity sitting on top of the 20-foot high rock outcrop the scientists have dubbed Mt. Mercou. The 16,400 foot high Mt. Sharp is to the south, with the rim of Gale Crater about 30 miles to the north.

I have annotated the image to show the rover’s route both before and after the moment when this picture was taken. As the caption at the link notes, the rover is currently working its way up Mt. Mercou, a route that was not initially in their plans, as shown by the wider MRO view below. 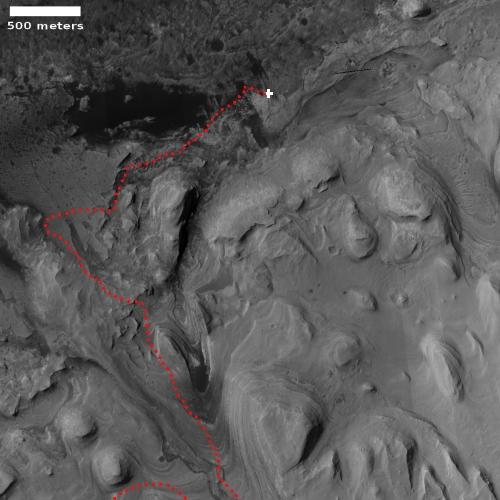 The photo to the right, cropped and reduced, is the same as the image above, only it shows a wider view. The white cross marks Curiosity’s position. I have also added the planned route up Mt. Sharp, indicated by the red dotted line. By heading up Mt. Mercou they are covering ground not planned. I suspect that they will retreat to smoother ground once they have gathered the data they want from the bedrock on this outcrop, though they might decide to cut directly south and west, gathering good data of this new geology that they would not see if they retreated downhill to smoother ground.

When Curiosity was at the above location in mid-April, it took several panoramas, first to the south at the steep and high foothills of Mount Sharp, now only a short distance away, and second to the north, across Gale Crater to its northern rim. I posted those panoramas in April, but I include them again below. 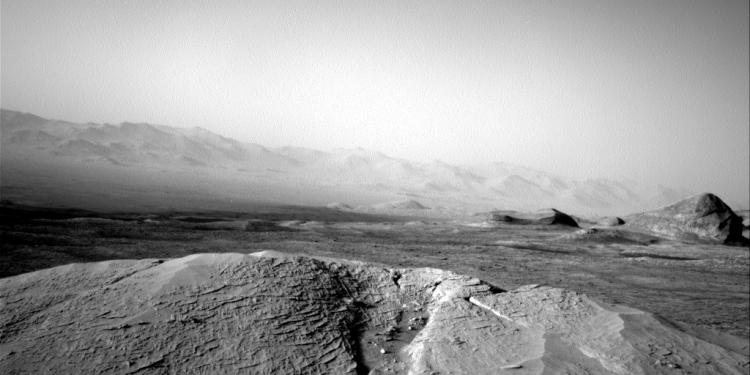 The first panorama of Gale Crater also covers the terrain the rover previously traveled. As I noted in April, “I think the smallest mesas on the left of this image are the Murray Buttes which Curiosity was traveling through back in 2016, but am not certain.”

In the second panorama, look closely at the ground to the lower right. This rough type of surface is exactly what Curiosity is presently crossing on Mt. Mercou. As I noted in that April post, “Travel is going to be tricky from here on out.”