Some cool images to savor from Mars! Above is a panorama from Curiosity, created by me from two images taken by the rover’s left navigation camera today, April 18, 2021. The view is southwest towards the canyon regions where Curiosity will be heading in the coming months. Note the roughness of the ground. Travel is going to be tricky from here on out.

The photo was taken from the top of Mont Mercou, the 20-foot high outcrop that the rover spent several weeks studying at the cliff’s base. The Curiosity science team is presently preparing to drill into the bedrock at the top. 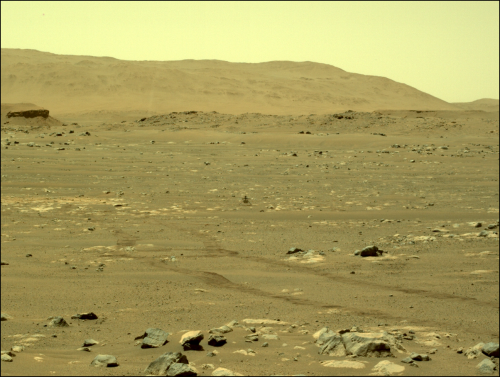 The photo to the right, reduced to post here, was taken by Perseverance on April 13, 2021, and looks west across the floor of Jezero crater. The high mountains in the distance are the crater’s rim. The low and much closer hill is the delta that is the rover’s primary geological target.

In the center of the picture is the helicopter Ingenuity. You can also see the tracks of Perseverance’s wheels just below it.

This will be the rover’s vantage point when Ingenuity attempts its first test flight in the early morning hours of April 19, 2021. The helicopter will head to the right once it lifts off.