Curiosity takes selfie next to two of its most important drill holes
October 24, 2019 3:04 pm Robert Zimmerman 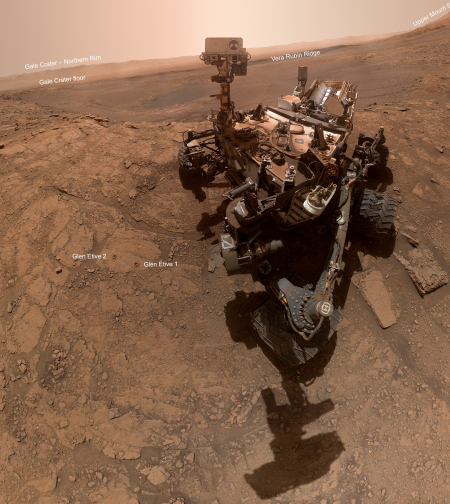 The Curiosity science team today released a beautiful mosaic of the rover, stitched from 57 different images. The photo at the right, cropped and reduced to post here, is the annotated version of that image. It shows the rover’s two most recent drill holes to the left. As the view looks away from Mount Sharp, you can see in the distance Vera Rubin Ridge, the floor of the crater, and its rim on the far horizon.

The two drill holes are significant because of the chemical experiment that Curiosity is subjecting the material from those holes.

The special chemistry experiment occurred on Sept. 24, 2019, after the rover placed the powderized sample from Glen Etive 2 into SAM. The portable lab contains 74 small cups used for testing samples. Most of the cups function as miniature ovens that heat the samples; SAM then “sniffs” the gases that bake off, looking for chemicals that hold clues about the Martian environment billions of years ago, when the planet was friendlier to microbial life.

But nine of SAM’s 74 cups are filled with solvents the rover can use for special “wet chemistry” experiments. These chemicals make it easier for SAM to detect certain carbon-based molecules important to the formation of life, called organic compounds.

Because there’s a limited number of wet-chemistry cups, the science team has been saving them for just the right conditions. In fact, the experiment at Glen Etive is only the second time Curiosity has performed wet chemistry since touching down on Mars in August 2012.

This time however was the first time they had used a wet chemistry cup on material from a drill hole. That they were able to do this at all is a testament to the brilliant innovative skills of the rover’s engineers. They had been holding off doing a wet chemistry analysis from drill hole material until they got to this point, but on the way the rover’s drill feed mechanism failed. It took more than a year of tests and experimentation before they figured out a way to bypass the feed mechanism by using the arm itself to push the drill bit into the ground. That rescue made possible the wet chemistry experiment that they initiated on September 24.

The results, which are eagerly awaited, won’t be available until next year, as it will take time for the scientists to analyze and publish their results.

Curiosity meanwhile has moved on, leaving this location where it had remained for several months to march in the past week southward back towards its long planned route up Mount Sharp.