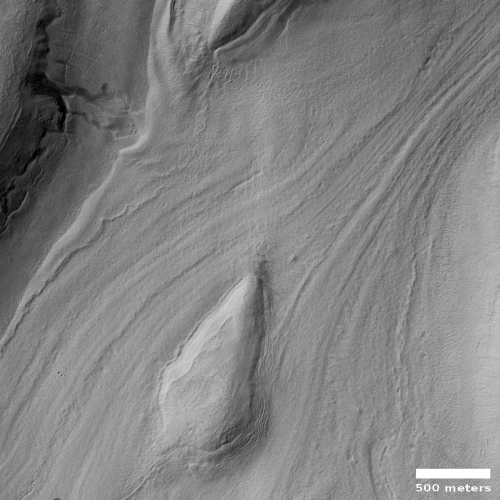 Cool image time! The photo to the right, rotated, cropped, and reduced to post here, was taken on December 26, 2020 by the high resolution camera on Mars Reconnaissance Orbiter (MRO). It shows an apparent glacial flow in a canyon heading downhill to the southwest, with evidence of a gully on its western wall whose collapse apparently squeezed into that glacial flow, pushing it to the east.

What makes this particular image interesting is not its uniqueness but just the opposite. Almost every high resolution picture along the length of this 750 mile long canyon, dubbed Dao Vallis, shows the same thing, an ice-filled ravine with that ice flowing like a river downhill.

The overview map below provides some spectacular context. 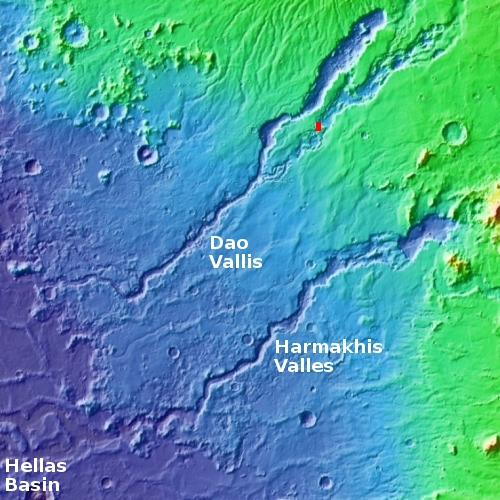 The red rectangle marks the location of this photo. To get a real sense of how much like a river of ice Dao Vallis is, go to the archive of MRO’s high resolution camera and zoom into Dao Vallis. Select the arrow from the icons at the top and then click on any red box along the canyon. Every single image shows similar features, a glacial flow filling the canyon from wall to wall and flowing downhill to the west.

Dao Vallis flows from latitude 30 degrees to 40 degrees south, feeding into Hellas Basin, what I call the basement of Mars. This places it directly inside the southern mid-latitude band where scientists have found numerous features resembling glaciers. Their research has also found a large concentration of such features on the eastern border of Hellas, making this region similar to the northern area I call glacier country along the chaos terrain regions dubbed Deuteronilus, Protonilus, and Nilosyrtis.

Dao Vallis however provides something more. Unlike those chaotic regions in the north, which have many glacial features but no distinct and long channels resembling rivers, this valley provides solid evidence that many of the meandering canyons of Mars that resemble river channels to our Earthbound eyes might instead be channels carved by ice.

In fact, that is what Dao Vallis is. Though there is evidence that the initial formation of this canyon was related to volcanic activity at its source, the Dao Vallis we see today was shaped neither by a river of lava nor a river of water. Instead, what we see is a river of ice, its channel incised over eons by the slow downward flow of glacier that presently fills it.

There are no glaciers as long as this on Earth, and thus Dao Vallis offers us a look at a geological process that while superficially resembling glaciers on Earth, is still significantly alien. And though alien to us it might actually be common on Mars, and a fundamental component of its geological history.