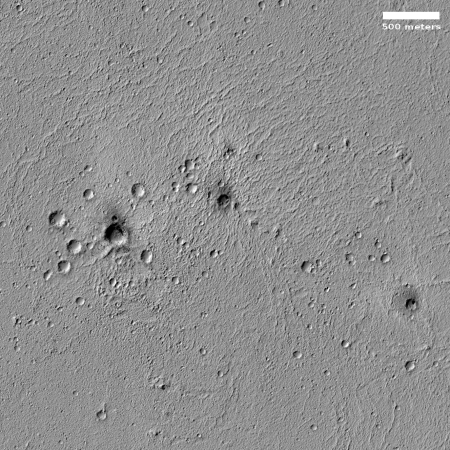 It’s time for the first cool image of 2020! The photo to the right, cropped and reduced to post here, was taken by the high resolution camera on Mars Reconnaissance Orbiter (MRO) on October 10, 2019. It shows a handful of darkened craters on the vast volcanic Elysium Planitia plain between the giant volcanoes Olympus Mons to the east and Elysium Mons to the north.

My first thought was that these dark craters were recent crater impacts, possibly a set of secondary impacts from a larger nearby impact. However, in looking at the archive of MRO’s high resolution camera at this location (Latitude 5.925° norther; Longitude 164.965°) I found that almost no high resolution images have been taken in this region, as shown by the overview map below to the right. 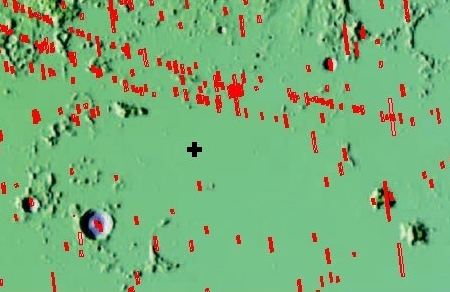 The black cross indicates the location of the image above. The red rectangles indicate where MRO has taken other high resolution images. As you can see, this area, about a hundred square miles plus in size, is largely untouched by high resolution images. The nearest other image, to the south, also showed the same features, a generally featureless plain with a few scattered small craters, some of which are darkened in their interior.

That not all the craters are darkened strengthens the hypothesis that the darkened craters are recent impacts, all occurring at the same time. However, for an impact to have created so many secondaries suggests that it was relatively large, and though I could find some research that found recent impacts in this region (here, here, and here [pdf]), no impact seemed large or close enough to account for all these darkened craters.

Then again, maybe this area was not hit by one large impact with secondaries, but by a rubble pile asteroid like Bennu, that broke up upon entering the Martian atmosphere and splattered a scattering of rocks across a wide area. That could account for the many recent small impacts.

Or maybe wind is removing dust to reveal the darker basalt volcanic material below, as seen in the dark splotches on the lower western flanks of Olympus Mons. The problem with this theory is that it is difficult to explain why only some craters are attracting wind, and why the wind removal is only happening in craters. Some of the same theories that explain the Olympus Mons splotches might apply (these craters happened to be thermally warmer for any number of reasons, thereby attracting dust devils). Somehow this explanation does not promote enthusiasm.

So what do we have? We have another cool image, and another Martian geological mystery that likely cannot be solved until people are actually roaming about on the surface of Mars.