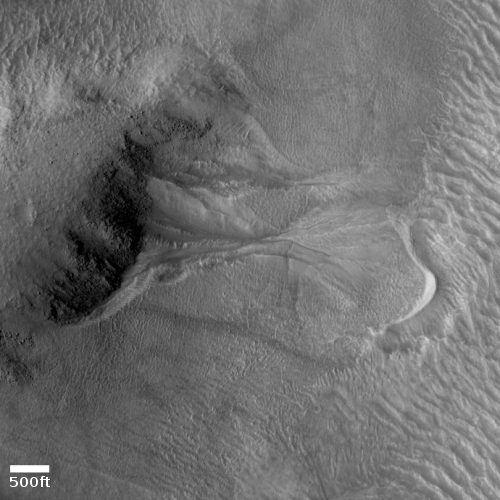 Cool image time! Today we take a look at one particular 100-mile-wide crater, Lohse Crater, located in the southern cratered highlands on Mars. The photo to the right, cropped and reduced to post here, focuses in on one of the many eroding gullies found in the mountainous region surrounding the crater’s central peak. Taken on August 20, 2020 by the high resolution camera on Mars Reconnaissance Orbiter (MRO), the full image is centered on that central peak, just off the south edge of this cropped section. This new image is part of a long monitoring campaign, begun in 2007, of this central peak region. For more than six Martian years, scientists have been tracking the numerous gullies found throughout the central peak region to see if there have been any changes.

I focused on this specific gully because I think it illustrates well why planetary scientists are monitoring these gullies. Whatever flowed down from the cliff on the left hit the material on the right hard enough and fast enough to imprint a curve into the material on the crater floor. Moreover, it does not appear to have simply been a landslide, for several reasons. First, the cliff does not appear cut back at the flow’s head, as you would expect if a section had broken off. Second, the material in the flow does not look like debris from an avalanche. In fact, there does not appear to be very much debris in the gully at all.

Was that flow water? This is the big question. Lohse Crater is significant in that it was one of the first locations on Mars [pdf] spotted by Mars Global Surveyor in the late 1990s where gullies were found suggesting some form of regular erosion possibly caused by flowing water. As this 2005 paper then concluded,

[T]he features documented in this study are best explained by surface accumulation of snow, followed by melting and runoff.

In the decade and a half since much new data has helped refine this conclusion. As noted in the caption for a 2009 MRO hi-res image of Lohse’s central peak gullies,

Gullies are present on many slopes on Mars, especially between the latitudes of 30 and 70 degrees in both hemispheres. Gullies are formed by fluids and have three distinct parts to them: an eroded “alcove” at the top, a sometimes sinuous “channel” section, and finally a large “debris apron” where the material eroded by the gully is deposited. [emphasis mine] 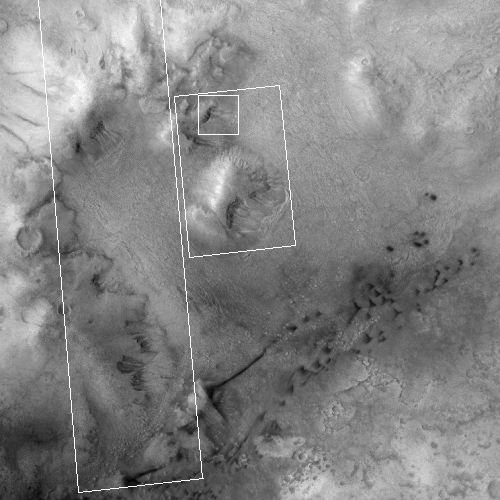 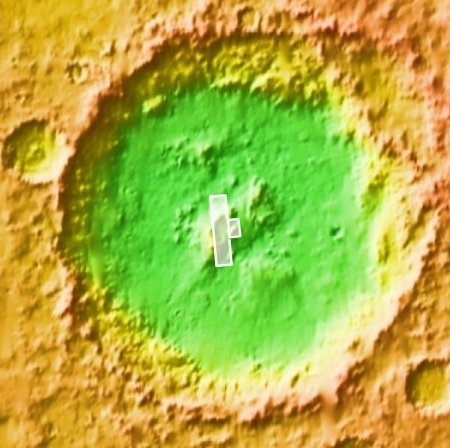 The wide angle image to the right, taken by the context camera on MRO and cropped, reduced and annotated by me, shows the area covered by both of these 2009 and 2020 MRO photos. The smaller white box shows the area of the 2020 image that I have highlighted above. The region covered is most of the crater’s central peak mountains, with the central peak the rounded mound near the center.

The map below shows all of Lohse Crater, with the two white rectangles indicating the area of the central peak covered by these photos.

The highlighted words in the quote above help explain much. The latitude of this crater, about 43 degrees south, puts it squarely in those mid-latitude bands, which in the decade since 2009 scientists have concluded contain numerous glacial features.

Thus, it would not be surprising if this crater contains glacial material, and that sublimating ice or some form of melting water brine is a cause of this gully erosion. Some high resolution images, such as this 2009 photo of the crater floor, suggest eroding glacial debris. So does some of the lower elevation features in the first two images above.

However, this 2018 image of a different part of Lohse Crater’s floor does not resemble the typical glacial features usually seen in mid-latitude craters, though it does show a very eroded surface that might be from sublimating underground ice.

The gullies here remain a significant Martian scientific mystery. They suggest the presence of flowing liquid water, but such flowing water cannot exist in the present climate and thin atmosphere of Mars. Nor have any scientists been able to develop a generally accepted model that makes possible the right kind of climate for flowing water, at anytime in the far past.

The hypothesized presence of glacial material might help explain what we see, though it would be a mistake to assume the explanation is that simple. There is more going on here than I think we presently know. Better data is needed, most likely gathered in situ on Mars itself.