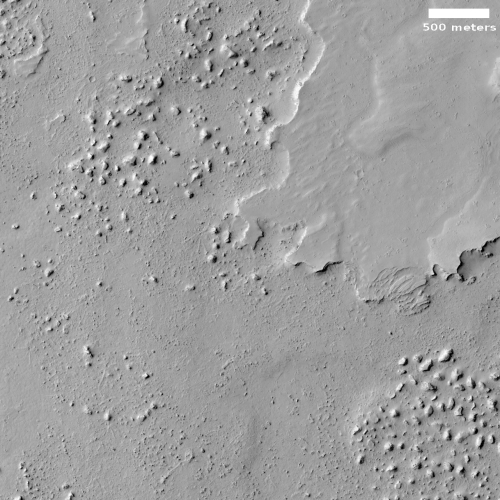 Cool image time! The photo to the right, rotated, cropped, and reduced to post here, was taken on April 19, 2021 by the high resolution camera on Mars Reconnaissance Orbiter (MRO). Requested by Colin Dundas of the U.S. Geological Survey’s Astrogeology Science Center in Arizona, the image was entitled “Enigmatic Terrain in Elysium Planitia.” The image is labeled so because, as Dundas explained,

Flood lava is a key part of the feature, best seen at the north and south ends of the image. What’s unusual is the knobby terrain at the center. … I haven’t yet been able to do a more thorough study of these features, so plenty of puzzles remain!

The higher material in the upper right is likely flood lava. A 2016 paper [pdf] led by Dundas on similar features in Elysium Planitia that were not as knobby found their origin somewhat baffling. The evidence suggested that lava, mud, wind, and ice could all be involved in their formation, but the evidence was also not sufficient to eliminate any possibility.

In the case of today’s image, the explanation might also be any of these possibilities. For example, we might be looking at the erosion of the flood lava, exposing harder knobs of different material that had been there before and had been covered by the lava. Or maybe the knobs are simply the last bits of that layer of flood lava that has not yet eroded away.

As always, the overview map provides some context.

Elysium Planitia is the vast lava plain about 800 miles wide and 200 to 400 miles wide that sits south of the shield volcano Elysium Mons. It contains some of the youngest lava floods identified so far on Mars, such as the Athabasca Valles flood lava, thought [pdf] to have occurred about 600 million years ago and covering an area about the size of Great Britian over a period of only a few weeks.

The small white rectangle east of Athabasca Valles marks the location of today’s photo. That it sits outside the vast volcanic ash deposit labeled the Medusae Fossae Formation means that the smooth areas here are likely hardened lava, not dusty ash deposits.

It erosion explains the knobby area, the next question is why that particular area of flood lava eroded but the layers of lava to the north and south did not. To answer that question however will require a lot more data.